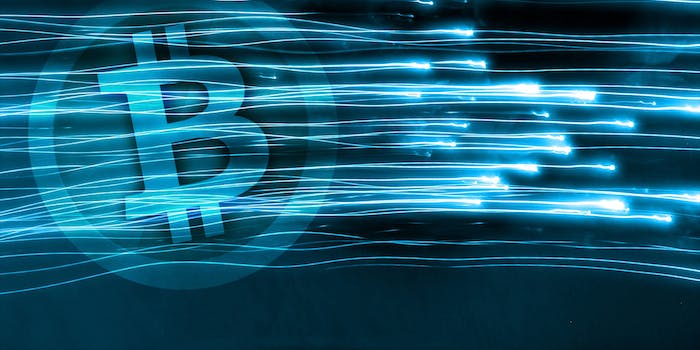 For all the chatter about Bitcoin’s investment potential, a group of major players has been notably absent from the conversation.

As the price of Bitcoin has shot into the stratosphere, there’s been a growing chorus talking about the virtual currency not only as means of exchange but as a vehicle for investment.

Just consider the following: A single Bitcoin purchased for $65 six months ago is now worth around a $1,000, and a Malta-based Bitcoin hedge fund has posted returns of nearly 5,000 percent this year (making it the single best performing hedge fund in the world).

What is surprising, however, is that for all the chatter about Bitcoin’s investment potential, a group of major players has been notably absent from the conversation: large, established Wall Street firms.

The biggest organizations in the financial world have been conspicuously silent when it comes to Bitcoin, almost entirely staying out a staying out of a sector that’s been a huge moneymaking opportunity for those lucky enough to get in early. 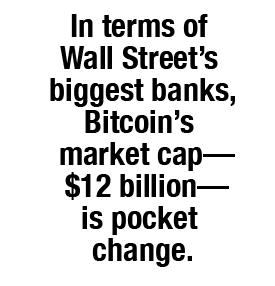 We reached out to several of the largest Wall Street investment banks to inquire about their Bitcoin holdings. Most declined comment or didn’t respond. A Citigroup spokesperson said the company hasn’t made any investments in Bitcoin.

There are a number of factors why Wall Street’s institutional investors are reticent to invest in the cryptocurrency, but one oft-stated reason—volatility—likely isn’t one of them.

The price of Bitcoin is certainly skittish. During one 24-hour period last week it fluctuated in value over a range of 370 points. ‟[But] that volatility isn’t what’s scaring off major investors,” said Garrick Hileman, an economic historian at the London School of Economics, who noted that savvy operators with deep pockets often generate their largest returns when markets experience wild fluctuations.

Hileman countered that one of the main factors standing in the way of Wall Street getting into Bitcoin is access. Ensuring a consistent platform where Bitcoins can be bought and sold isn’t something that’s exactly guaranteed at all times. A study by researchers at a pair of American universities found that nearly half of the Bitcoin exchanges established over the past three years have closed their doors, usually with little to no prior warning. In two-thirds of the cases, no form of refund was given to depositors. Patrons’ bitcoins simply vanished.

Given the decentralized nature of the currency, when the money in them disappears, there’s not much people can do about it.

‟I write about it every day,” sighed Daniel Cawrey, editor of the Bitcoin news blog Coindesk, ‟exchanges getting hacked, people losing their money.”

Fears about a sudden inability to sell bitcoins if exchanges shut down are largely secondary to the main issue preventing companies like Goldman Sachs and Credit Suisse from jumping into the Bitcoin game: government regulation—or rather, the lack of it.

At present, Bitcoin largely exists in a sort of legal grey area. As regulators around the world struggle to wrap their policies around the virtual currency, there’s a fear that Bitcoin’s reputation as a haven for black market dealings, tax evasion, and money laundering could lead regulators to crack down at any moment. Just last week, China’s central bank issued new rules prohibiting financial institutions in the country from transacting in bitcoins. 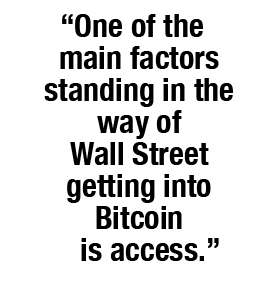 While government officials in the United States, at least at the federal level, have appeared sympathetic to Bitcoin, but there’s a lingering fear this relatively permissive attitude could change at any moment.

The lack of regulatory clarity’s also pushing banks away from doing business with companies who deal in Bitcoin.

Silicon Valley Bank, which announced a partnership with the Bitcoin business incubator Coinlab early this year, has since put the brakes on working with Bitcoin firms. ‟Until regulatory guidance is clear on banking and payment processing for virtual currency companies, we are not adding more relationships in this sector to our client portfolio,” wrote a Silicon Valley Bank spokesperson to the Daily Dot.

Bitcoin’s market cap—that is, the combined value of every Bitcoin currently in existence—is only about $12 billion. In terms of Wall Street’s biggest banks, that’s pocket change. It’s about the same dollar figure added to Apple’s market cap following a single tweet by famed activist investor Carl Icahn. It’s not really enough to justify navigating the still choppy waters of emerging Bitcoin regulation and risk the reputational risk of getting slammed by the Securities and Exchange Commission for doing deals in it that would otherwise be completely unremarkable.

“If you’re a professional investor or an financial institution, it can be difficult to invest in Bitcoin,” explained David Kintisky, general manager of the Bitcoin Investment Trust. ‟There’s no stock symbol, so you first you have to figure out how to buy it, then you have to figure out how to hold it, and explain it to your compliance guys how it all works, and then find a way to report it on your taxes.”

Hesitence on the part of large financial institutions’ investment arms to trade in Bitcoin extends into other sectors of their wide-ranging business as well, such as taking deposits or making loans, which has presented myriad opportunities for companies willing to take on that risk.

‟The lack of major players allows for smaller startups, like Coinbase and Bitpay, to come in and be instantly competitive,” said Cawrey. ‟If Citibank or Bank of America was handling Bitcoin transactions, these companies wouldn’t exist because banks could do it themselves with the benefit of their massive infrastructure.” 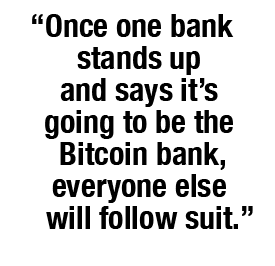 Kintisky’s Bitcoin Investment Trust is operated by the New York-based Second Market, which is primarily known for trading in pre-IPO shares of companies and functions by simply buying a whole heap of bitcoins and riding the price up and down. The fund currently holds about $70 million in assets, and Kintisky asserts that it’s the de facto player in the U.S. Bitcoin investment market.

Kintisky notes that the main investors in his fund are Silicon Valley/Silicon Alley tech entrepreneurs attracted to the novel technological aspect of Bitcoin, folks from family offices or wealth management firms (read: really rich people), and Wall Street employees making investments on their own behalf.

It’s this third category that’s most interesting because it demonstrates that, while Bitcoin may still be too risky for Wall Street firms themselves, the opportunity isn’t lost on people who follow markets for a living. “We see that there are people who work at these big firms that are very interested in Bitcoin,” Kintisky confirmed.

This interest in Bitcoin runs the spectrum from junior traders all the way up to some of the most powerful people on the industry. In October, Michael Novogratz, chief investment officer of the $58 billion Fortress Investment Group hedge fund, praised the virtual currency, saying that he has ‟a nice little Bitcoin position.”

Novogratz added that, while Fortress had looked into investing in Bitcoin in an official capacity, the firm stopped short of actually adding Bitcoin to its portfolio.

However, that act of investigating Bitcoin isn’t unique to Fortress. ‟There’s certainly been an absence of them wanting to be talked about with regard to Bitcoin, but every major Wall Street firm is at least looking into it,” Kintisky explained. ‟But, once one bank stands up and says they’re going to be the Bitcoin bank, everyone else will follow suit. … This may happen within the next year or so.”

The Wedbush report argues that Bitcoin has the potential to be worth up to 100 times its current value, comparing it to a ‟biotech [company] that had a molecule that may cure the common cold.”

Bank of America, on the other hand, was more cautious, writing that the recent drastic increase in prices put Bitcoin ‟at risk of running ahead of its fundamentals,” which is a polite way of saying “bubble.”

However, both reports insisted that, contrary to the charges of critics like former Federal Reserve Chairman Alan Greenspan, Bitcoin’s ‟intrinsic value” comes as a result of its usefulness as a medium of exchange—an alternative to electronic payment formats like Visa, Mastercard, or eBay.

Gil Luria, the author of the Wedbush report, explained that once institutional investors understand the source of Bitcoin’s intrinsic value they’ll likely feel more comfortable using it as an investment vehicle. Confusion and trepidation of regulation is hindering Bitcoin investment right now, but ‟the regulatory path for how Bitcoin moves out of the grey and black markets and into a regulatory environment where institutional investors feel comfortable is pretty clear,” he said.

In the days since he published his report on Bitcoin, Luria has been flooded with calls from institutional investors interested in learning more about what it would take for their firms to begin investing in Bitcoin.

“The reaction I’ve gotten to the report has been tremendous,” he said. “It’s all I’ve been talking about all week.