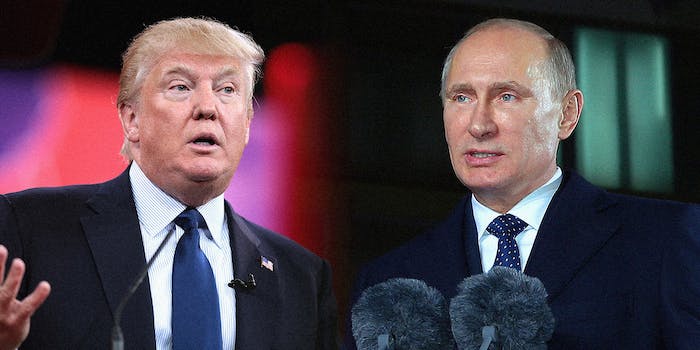 Can you see the irony here?

Vladimir Putin is apparently getting tired of the Russia investigation.

“We are hostages to this internal strife in the United States,” the Russian president said Saturday at an economic forum in St. Petersburg, via USA Today. “I hope that it will end some day and the objective need for the development of Russian-American relationships will prevail.”

It’s an irony, of course, that the man in charge of Russia—which, according to every U.S. intelligence agency, interfered in the 2016 presidential election—now is upset that this very investigation is affecting the countries’ relationship.

President Donald Trump, meanwhile, has been railing nonstop against the Robert Mueller-led Russia investigation for weeks.

This weekend, he tweeted a number of statements, writing, “With Spies, or ‘Informants’ as the Democrats like to call them because it sounds less sinister (but it’s not), all over my campaign, even from a very early date, why didn’t the crooked highest levels of the FBI or ‘Justice’ contact me to tell me of the phony Russia problem? This whole Russia Probe is Rigged. Just an excuse as to why the Dems and Crooked Hillary lost the Election and States that haven’t been lost in decades. 13 Angry Democrats, and all Dems if you include the people who worked for Obama for 8 years. #SPYGATE & CONFLICTS OF INTEREST!

“When will the 13 Angry Democrats (& those who worked for President O), reveal their disqualifying Conflicts of Interest? It’s been a long time now! Will they be indelibly written into the Report along with the fact that the only Collusion is with the Dems, Justice, FBI & Russia? … Why didn’t the 13 Angry Democrats investigate the campaign of Crooked Hillary Clinton, many crimes, much Collusion with Russia? Why didn’t the FBI take the Server from the DNC? Rigged Investigation!”

On Sunday, Trump also wondered how the people with “young and beautiful lives … with stars in their eyes” who are entangled in the investigation would recover.

Who’s going to give back the young and beautiful lives (and others) that have been devastated and destroyed by the phony Russia Collusion Witch Hunt? They journeyed down to Washington, D.C., with stars in their eyes and wanting to help our nation…They went back home in tatters!

On Memorial Day weekend, Trump, as of this writing, has tweeted about the Russia investigation five times and just once about the war veterans who have been lost. He also was caught in a lie about a New York Times source that he said didn’t exist but actually did.