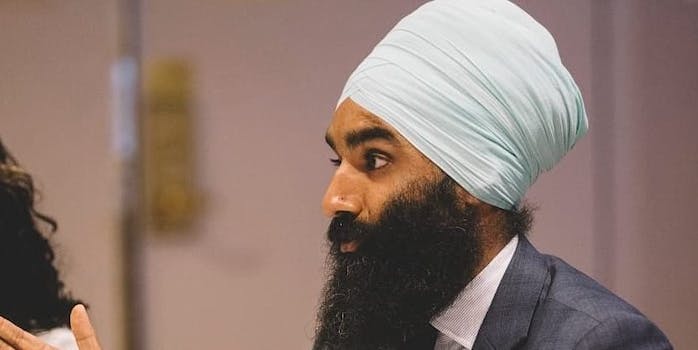 They're being heralded for being courageous and restrained.

Faced with the growing threat of racism and hate crimes in the U.S., some have begun confronting what they see as everyday bigotry head-on. Over Labor Day weekend, a pair of videos of people calling out “racism” and “Islamophobia” went viral.

The video begins with a man, later identified as Stephen Garvey, founder of Canadian political party National Citizens’ Alliance, saying to Singh, “Did you know Islamophobia was created by the Muslim brotherhood in 1990?” (Islamophobia has existed for centuries; until 1944, being Muslim was used as grounds to deny American citizenship.)

Singh’s response, “That is racism … we don’t need that kind of racism in Canada,” sets Garvey off. Raising his voice, Garvey says, “It’s not racism. It’s not hate. It’s the truth, buddy.”

Increasingly agitated, Garvey shouts about sharia law, asks Singh to debate him and insults him.

“You’re full of political correctness. I despise people like you. You’re full of crap, buddy. You’re a liar and a cheat,” Garvey yells.

The video quickly spread after it was posted by activist Mohammed Hashim. By Tuesday morning, it had 1.8 million views.

Comments were mostly favorable to Singh and critical of Garvey. Many were impressed by the fact that Singh never points out that he is Sikh, not Muslim. “Imagine being so racist & ignorant you can’t distinguish Sikhs from Muslims.  Now imagine being so compassionate you don’t respond with ‘I’m not Muslim’ but instead courageously condemn the racism for what it is. My immense respect to MP @GurratanSingh,” tweeted Qasim Rashid, a Democratic candidate for Virginia’s state senate.

Singh later posted a video explaining his perspective of what happened. He says that during his speech he noticed a man in the crowd getting “very agitated”; afterward, the man pushed through security and accosted him. At that moment, Singh says, he thought of a lesson his brother taught him: “Anytime we are faced with racism we must confront it and condemn it. And more so when we are subject to Islamophobia, we must never say that we are not Muslim but instead say that hate is wrong, to show solidarity with the Muslim community, and more so show that hatred has no place in either Canada or the world.”

Singh’s brother Jagmeet Singh, leader of Canada’s New Democratic Party and candidate for prime minister, was among those heaping praise on him.

I'm proud of you brother. When hate is allowed to grow, it spreads & consumes everyone. That's why we must always call it out.

And at the heart of hate is fear – and only love can conquer fear.

That's why it’s so important that we take better care of each other. https://t.co/GPPTlvsA37

A few felt that Garvey was unfairly maligned for confronting a politician and asking questions. “‘I’ll debate you anytime’ doesn’t sound like a racist to me… yeah, maybe he’s insensitive and not welcome, but calling him a racist for that is the despicable part,” one person commented on the video.

Garvey, whose political party calls for “a moratorium on immigration with no end date,” “ideological screening at the border,” and “a moratorium on sanctuary cities,” also takes issue with the assertion that he is racist.

Yesterday, Garvey tweeted, “@GurratanSingh crying racism does not make it racism. I called out your political correctness & pandering to ethnic groups, while you say Islam is all love & peace. Shame on you. The 10th Sikh Guru & many other Sikhs were slaughtered by radical Muslims…”

Garvey’s tweet included a link to a longer video posted to National Citizens’ Alliance’s Facebook page. In it, Garvey heckles Singh during his speech then goes looking for him. “Where is that guy? Let’s go find him. … Where the hell is that loser?” he says.  The video does not contradict anything in the shorter version.

You yelled at a Sikh about Sharia law. Nova Scotia is full of diverse and multicultural communities. If you want to spread hate and division move to the United States.

The second viral video features a Muslim woman confronting a white man who was reportedly speaking against the Muslim faith in Birmingham, Michigan.

This white supremacist was calling out against Muslims in Birmingham, MI

Muslim woman: "The people dying from ISIS are not you guys. White people are not dying from ISIS. The biggest victims of radicalization are Muslims themselves. I've been to refugees camps…I know" pic.twitter.com/xICPnDOagP

The video, posted by an activist who goes by @_SJPeace_ on Monday, begins with the man saying, “If me and him went over there and preached, they’d kill us in a heartbeat.” It appears he is referring to a mosque.

The woman, who has thus far chosen to remain anonymous, responds, “OK, thank you for your perspective, now let me tell you mine. I am Syrian. My family is from Syria and they live there. And I’m telling you right now that the people dying from ISIS are not you guys. White people are not dying from ISIS.

“I’m telling you right now, the biggest victims of radicalization are Muslims themselves.”

When the man attempts to argue with her, she calmly shuts him down. “Did that sound like an intellectual statement to you? … What you just said that barely even made sense,” she says. “I’ve been to refugee camps in Jordan…. I am telling you from firsthand experience. I have family there. So it is very offensive for you to come here and try to play the victim when I know the real victims’ names.”

People were blown away by her poise. “I’d like to see the rest of the video and see if he ever has a moment of awakening. Her calm, articulate demeanor is wonderful in the face of a man who hates her for no other reason other than the brainwashed filth he was led to believe,” is a representative comment.

By Tuesday morning, the video had 800,000-plus views. Some weren’t convinced that the man in the video is a white supremacist.

I suspect he couldnt find Jordan on a map… but probably his internet browser history would find a different one. Very sad, very predictable. Education required. I dont think he's a white supremacist, just one of many deranged US evangelicals that havent read the Bible.

Islamophobia has always existed in Western society (see: the Crusades). The 9/11 terrorist attacks gave rise to a new wave of hate toward Muslims. In more recent years, Islamophobia has been bolstered by rhetoric from elected officials.