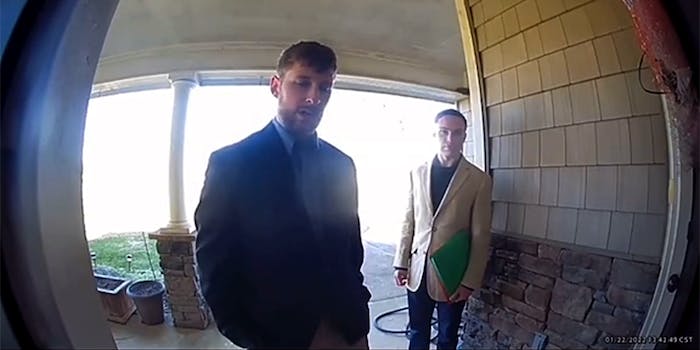 A viral TikTok shows two men who claim to be white nationalists knocking on someone’s door and asking to talk to them.

The video captured by a Ring camera shows two men standing on a porch. “Can I help you?” a male-sounding voice asks from inside the home. The occupants don’t open the door.

“Good afternoon,” one of the two men replies, “We are white nationalists and we’re going around hoping to talk to people about some things.” The audio drops in and out for a few seconds, but it sounds as if he says something about white people in the United States.

“We’re hoping to have a few minutes to talk to you about that,” he concludes.

“Did you say you’re a white nationalist?” the home’s male-sounding occupant replies.

“We’re not interested,” a female-sounding voice also coming from inside the house says seconds later.

The man asks if they can leave a flier. It’s not clear whether the occupants reply. The men then thank them for their time and leave.

The video was posted by Mallory Hytes Hagan, a former Alabama congressional candidate and 2013 Miss America winner. Captions Hagan included on the TikTok say that it was captured in Cusseta, Alabama and notes with apparent disgust that the men were soliciting “in broad daylight.”

Cusetta has a population of 150, according to United States Census Bureau records. It’s not known if the men are residents of the area.

“Can we find these guys?” Hagan captions the TikTok, which has more than a million views as of this writing.

In a follow-up video, Hagan displays a brochure that men reportedly left behind. She said that the men had knocked on doors throughout her uncle’s neighborhood and notes that her TikTok of the brochure was taken down for violating community guidelines.

The cover reads, “End systemic racism. Be pro-white.” The interior runs through a laundry list of white grievances, such as being discriminated against, accused of racism, or schools teaching “anti-white” critical race theory.

Many of its claims and proclamations are blatantly racist. “Our country wasn’t always like this. Americans must become pro-white again!” it states.

The flier urges, “End anti-white discrimination” and “stop the great replacement.” The latter is a racist conspiracy theory that whites are being replaced by people of other races. The former refers to the false belief held by many white racists that white people are systemically discriminated against.

The back of the brochure suggests reading American Renaissance, VDARE, and Counter-Currents—all of which are designated “white nationalist” publications by the Southern Poverty Law Center.

It also lists the district’s senators and congressman and the addresses of their offices in Washington, D.C. It says that if these representatives “cared about white people, they would promote legislation” to end affirmative action, ban critical race theory in schools, prohibit immigration, and deport all undocumented immigrants.

“Please write to your congressmen today and tell them if they want your vote, they need to publicly announce that they are pro-white and support the above policies,” it concludes.

The brochure contained no further information about what group, if any, the men represented. Dropping off fliers and posting racist symbols and signs is a longtime tactic of white supremacist groups.

Reactions to Hagan’s TikTok and tweets ranged from terror to resolve.

“Going door to door to talk about racism. Do y’all know how hard this is to watch as a [person of color],” one commented on the TikTok. “I’m supposed to raise my children in this society.”