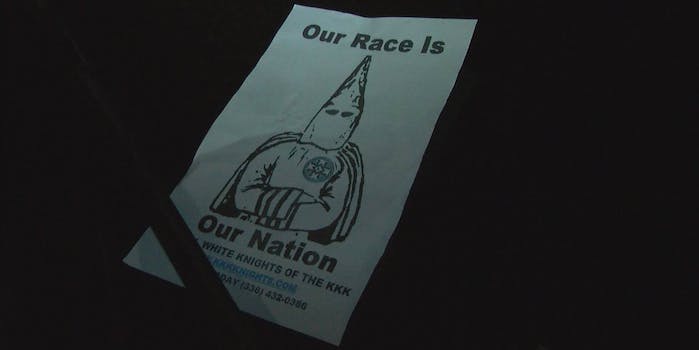 They read, 'Our race is our nation.'

Klu Klux Klan recruitment fliers have been found on cars in the village of Patchogue in Long Island, New York.

According to Suffolk county police, the fliers were distributed throughout a parking lot on Thursday, Nov. 17, around 2 a.m., News 12 Long Island reported.

This isn’t the county’s first run-in with the Klan over the course of this presidential election. Earlier this year, fliers were found on lawns and cars near a Long Island Rail Road station. Business cards were also found at a CVS pharmacy.

Police say the fliers were given to the Hate Crimes Unit and determined that they contain no criminality.

Later that morning, New York Gov. Andrew Cuomo issued a statement regarding the rise of hate crimes since President-elect Donald Trump’s election. He cited the KKK fliers, as well as a train car in Manhattan that had been vandalized with a swastika that same morning.

“My administration has launched a number of investigations into hate crimes targeting minorities and immigrants,” Cuomo said. “I call on all public officials, of all parties, and indeed, all people everywhere, to denounce and repudiate these expressions, and to pledge to punish to the full extent of the law anyone engaged in such acts. To remain silent is to engage in a dangerous new permissiveness that threatens our American way.”

Throughout his campaign, President-elect Donald Trump garnered the attention and support from the Klan. In February, white supremacist and former KKK Imperial Wizard David Duke announced his support for Trump, which Trump denounced.

Days before the election, the Klan’s official newspaper, the Crusader, supported Trump. In honor of Trump’s election, the KKK said it will hold a parade in North Carolina in December.

“This publication [the Crusader] is repulsive and their views do not represent the tens of millions of Americans who are uniting behind our campaign,” Trump’s campaign said after receiving the paper’s support.