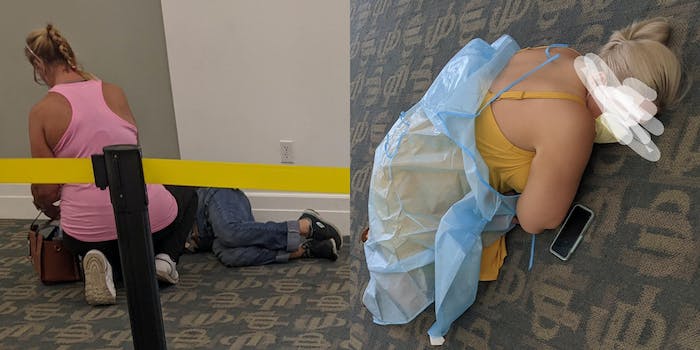 The image has fueled criticisms of Gov. Ron DeSantis.

A shocking image of Florida COVID-19 patients posted to Reddit this week has ignited criticisms of the state’s Republican governor.

The photo, first reported by First Coast News, shows people lying on the floor waiting for monoclonal therapy at a library in Jacksonville. The library is one of 15 sites the state recently set up to provide antibody treatment for free to COVID patients.

The image shows two people lying on the floor. One, a woman, is covered by a thin paper coat. The Reddit user who posted the image captioned it, “Everyone please be careful—whether you are vaccinated or not. My husband (vaccinated, but positive) has been waiting 2+ hours for monoclonal therapy and he says he has never seen people so sick. Moaning, crying, unable to move.”

Louie Lopez, who took the picture, told the Florida Times-Union that the disturbing image “doesn’t convey how much pain they were in.” Lopez added that the woman in the picture was dragging herself across the floor as the line advanced. He said that staff eventually got wheelchairs for the two.

The city has since increased the number of wheelchairs at the facility and added a sign telling people not to sit or lie on the floor. “If you require immediate medical attention, please alert a staff member,” it adds.

Early on, Florida defied expectations by having lower-than-expected numbers of COVID diagnoses and mortalities. That’s changed since the highly contagious delta variant began ravaging the nation. Florida is now one of the epicenters of the pandemic. In recent weeks, the state has accounted for nearly one in five cases.

Florida Gov. Ron DeSantis (R) is a staunch opponent of pandemic restrictions. The state was among the first to reopen from lockdown last year. The governor, an acolyte of former President Donald Trump, has banned masking requirements, including in schools. He’s also prohibited cruise ships from requiring vaccines. The state is currently embroiled in litigation over both decisions.

DeSantis took credit for Florida escaping the worst of the pandemic early on. Now that his state is in the grips of the delta variant, he denies blame.

“Maybe I should buy some stock today for all related monoclonal related pharmos……oh sorry, that classy move is reserved for scumbag donors of Gov. Deathspreader,” one person commented on the Reddit picture. The Associated Press reports that one of DeSantis’ top donors invested heavily in the maker of Regeneron, the antibody treatment.

Another chimed in, “Every day he pimps a press release for opening a new monoclonal center, it’s like he is a paid spokesman.”

Many people suggested that the public should see more images depicting the reality of COVID.

“People need to see it,” said one. “Enough of the coddling.”

The woman who took the picture says her husband is doing much better. Breakthrough infections such as his—when a vaccinated person contracts the virus—are significantly less likely to result in hospitalization or death.