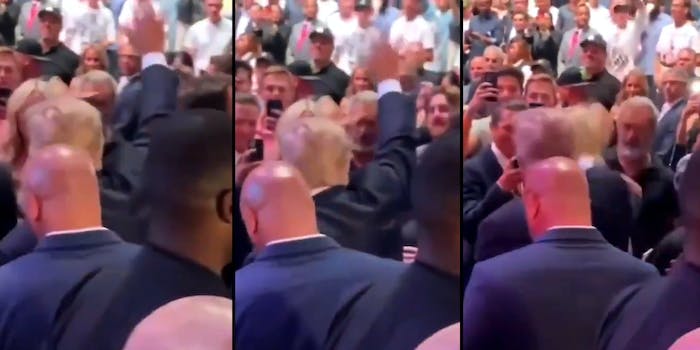 It is not clear in the video if Trump acknowledged Gibson's salute.

Actor Mel Gibson can be seen on video saluting former President Donald Trump at a UFC fight over the weekend.

Trump attended the event in Las Vegas on Saturday night, where he reportedly received applause and boos. The fight was between Conor McGregor and Dustin Poirier.

Presumably one of the people who cheered the former president was Gibson, as he was shown on video saluting Trump as he walked through the crowd.

Video from the event shows Gibson, who made antisemitic remarks to a police officer in 2006, saluting the former president behind a group of people as he walks through the crowd, waving.

It is not clear in the video if Trump acknowledged Gibson’s salute. Considering he was waving to a large group of people, it seems possible he didn’t notice the actor.