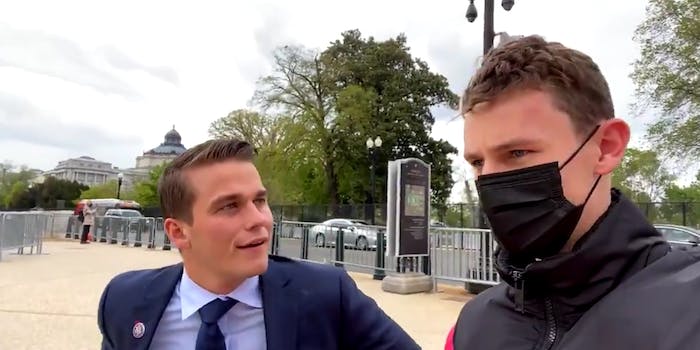 'Ask Mr. Fun Drivers why he referred to Hitler as the Fuhrer.'

Rep. Madison Cawthorn (R-N.C.) was caught denying his trip to visit Adolf Hitler’s vacation home in Germany during a trip in 2017 that he documented on his Instagram.

When asked about the trip in a Twitter video released on Thursday, Cawthorn denied visiting, claiming he was at a different site.

The video shows Cawthorn standing next to Noah Mitchell, a Washington D.C. student who often tweets videos of politicians, near the U.S. Capitol building. Cawthorn smiles toward the camera and looks to Mitchell as he begins to ask about the trip.

“What was that?” Cawthorn asks.

“Did you go to Hitler’s house?” Mitchell asks again.

“Nope didn’t go there,” Cawthorn says, moving away from the camera in his wheelchair.

“That, I believe was the retreat,” Cawthorn said.

“The retreat? OK,” Mitchell says while looking at the camera and laughing.

In an Instagram post from 2017, which Mitchell included in the Twitter thread, Cawthorn shared three photos and tagged the Eagle’s Nest, Hitler’s Bavarian mountain home exclusively used by Nazi leaders.

“The vacation house of the Führer. Seeing the Eagles Nest has been on my bucket list for awhile, it did not disappoint,” Cawthorn wrote in the Instagram caption. “Strange to hear so many laughs and share such a good time with my brother where only 79 years ago a supreme evil shared laughs and good times with his compatriots.”

Others found the original Instagram caption offensive since Cawthorn’s word choice seemed to imply a fondness for Hitler and that the vacation house was a bucket list trip.

“Ask Mr. Fun Drivers why he referred to Hitler as ‘the Fuhrer’; a term the Nazis used to show respect and endearment to that genocidal raving-lunatic,” another user tweeted.

Although the picture was mentioned in the news prior to Cawthorn’s appointment into Congress, it’s still leaving Twitter users wondering why the representative posted it in the first place.

“He does know Hitler would have had him executed because he’s disabled right?? He has to know that,” one user commented.