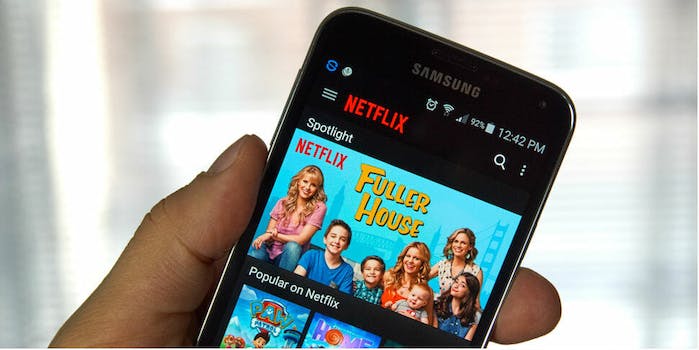 In a statement to Ars Technica, Verizon claimed the problem was only temporary and did not have an impact on video resolution.

“We’ve been doing network testing over the past few days to optimize the performance of video applications on our network,” a Verizon spokesperson said. “The testing should be completed shortly. The customer video experience was not affected.”

Its statement conflicts with several reports from users who saw degrading video quality caused by speeds capped at 10Mbps, according to fast.com—Netflix’s internet speed test website. Some angry Verizon subscribers resorted to using a VPN to bypass the problem.

It should be noted that users don’t need nearly as strong internet speeds when using Netflix on a mobile phone compared to a laptop or streaming device. The streaming giants says users “may use 1GB per 20 minutes or more depending on your device and network speeds.”

It’s certainly strange that customers would be experiencing worse internet speeds during a test designed to “optimize the performance of video applications.” It appears “optimize” in this context means only giving customers the minimum speeds required to stream Netflix and YouTube in high quality. The FCC allows mobile carriers to throttle video streaming despite rules that ban throttling. AT&T announced “Stream Saver” last year, a new technology designed to throttle video to DVD (not Blu-ray) output of 480p. It can be turned off by customers but is enabled by default.

As the Verge points out, Verizon may be overstepping its boundaries if it throttled one or two particular services. In this case, it appears Verizon customers were experiencing slowdown on only Netflix and potentially YouTube. Until the FCC figures out how to kill Title II, ISPs are still required to treat all traffic equally. That means no single service can be exploited.

Perhaps Verizon is getting back at Netflix for doing the same thing to the service provider last year.

We have reached out to Verizon and will update this article when we hear back.