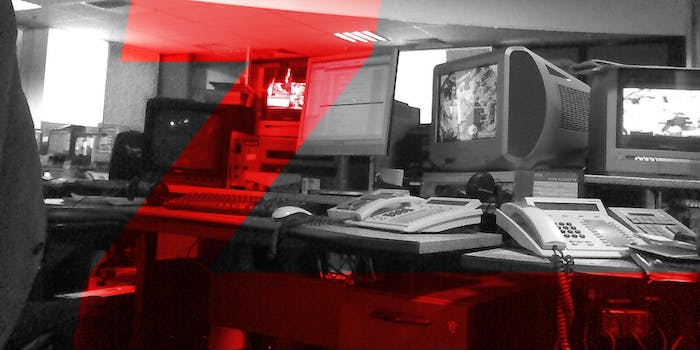 Verizon is launching a tech news site that bans stories on U.S. spying

Don't trust anything you read on the Internet.

Verizon is getting into the news business. What could go wrong?

The most-valuable, second-richest telecommunications company in the world is bankrolling a technology news site called SugarString.com. The publication, which is now hiring its first full-time editors and reporters, is meant to rival major tech websites like Wired and the Verge while bringing in a potentially giant mainstream audience to beat those competitors at their own game.

There’s just one catch: In exchange for the major corporate backing, tech reporters at SugarString are expressly forbidden from writing about American spying or net neutrality around the world, two of the biggest issues in tech and politics today.

Unsurprisingly, Verizon is deeply tangled up in both controversies.

The first revelation from Edward Snowden’s leaks showed that Verizon gave the National Security Agency (NSA) all of its customers’ phone records. Later leaks showed that virtually every other major phone and credit card company in America was doing the same thing.

Verizon has been snarled in U.S. government surveillance for years. After the Sept. 11, 2001, terrorist attacks, USA Today reported, Verizon gave the NSA landline phone records without customer consent or a warrant. Just this week, it was revealed that Verizon is tracking all of its wireless customers movement throughout the Web.

Verizon has also led the charge to kill net neutrality—the principle that Internet service providers, like Verizon, should treat all Internet traffic equally—earning its place as the most vocal, aggressive, and well-funded opponent the so-called open Internet movement faces.

Curiously, Verizon’s self-censorship applies only to surveillance conducted by the United States. SugarString reporters are allowed to write, and have already written about, spying in other countries. Chinese surveillance, for instance, is fair game, as made evident in this article about anonymizing hardware, which mentions Chinese dissidents who risk their lives against state surveillance.

News of Verizon’s publishing venture and its strict rules first came to light to multiple reporters through recruiting emails sent last week by author and reporter Cole Stryker, who is now the editor-in-chief of SugarString. (Stryker has also previously contributed to the Daily Dot.) I was one of the reporters who received that email. The premise and rules behind the site were explained to me in a series of messages throughout the day. I declined the job offer.

Other reporters, who asked not to be named, have confirmed that they have received the same recruiting pitch with the same rules: No articles about surveillance or net neutrality.

Verizon describes SugarString, which was first registered by the telecommunications giant in June, as a site that “delivers the latest in technology and lifestyle news for a generation that doesn’t separate tech from everyday living. From breaking news to thoughtful essays, best-in-class op-eds and beyond, this site covers what millennials really care about today.”

That’s much more aspiration than reality at this point. Although there have been a handful of articles already published, the site’s editorial roster is still being assembled, hence the apparent onslaught of recruiting emails sent out last week. While Verizon has already occasionally used its big social media presence to direct traffic to SugarString, it’s fair to say that the site has yet to leave the starting line.

SugarString has a few clear inspirations, cited by Stryker in his recruitment email, most notably from the singularly successful media monster that is Vice. In 2009, Vice partnered with Dell to sponsor the popular tech-blog Motherboard. However, while Dell’s logo was all over Motherboard in its earlier days, Vice said there was no other connection and that Dell exercised no overt editorial power on the site.

Verizon, on the other hand, is establishing the ground rules at SugarString. While it gives reporters a wide berth on certain subjects, surveillance and net neutrality are verboten.

This is not, however, the first time a major modern American corporation has established its own news outlet. It’s not even the first time it’s happened this year.

Chevron, a $227 billion oil company, now publishes the hyperlocal Richmond Standard for Richmond, Calif., a town whose largest employer is a nearby Chevron petroleum refinery. Instead of being a useful journalistic enterprise, the Standard has been criticized as a well-funded propaganda tool meant to influence politics in an important arena, one that will dodge significant issues like multiple fires, noxious air pollution, and taxes.

Likewise, Verizon’s decision to build a technology news site that  flat-out ignores two of the biggest questions we have about the future of technology raises key questions about how the site can build a fair, comprehensive, and honest journalistic institution.

Virtually every story currently on the front page of SugarString—articles about GPS being used by law enforcement, anonymity hardware enabling digital activists, and artists on the Deep Web—would typically include information on American surveillance of the Internet or net neutrality to give the reader the context to make sure she’s fully informed.

But none of the current articles do that. At best, they dance around the issue and talk about how other countries aside from the U.S. conduct surveillance. That self-censorship puts blinders on the reader, never giving her all the information she should have—information that, not coincidentally, tends to make Verizon and other powerful interests look very, very bad.

To Verizon’s credit, they’re not hiding their role in building SugarString. Verizon advertisements dot the whole site, and each article has a footnote (in size eight font) telling readers that “these articles were written by authors contracted by Verizon Wireless.” It goes on to state that “the views expressed on SugarString may not necessarily reflect those of Verizon Wireless.”

What the site neglects to mention is that reporters are not allowed to express any view at all on two subjects that Verizon is extremely sensitive about.

Verizon did not return a request for comment in time for publication.

Photo via Mark Hillary/Flickr (CC BY 2.0) | Remix by Jason Reed