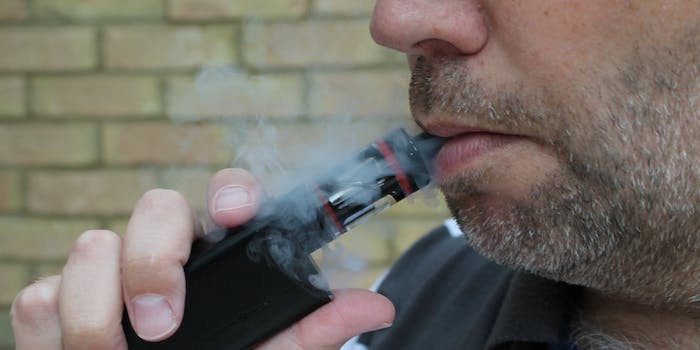 Vapers are letting their concerns known about the potential flavor ban.

A large number of vapers are using several hashtags on social media to voice their concerns with a proposal from President Donald Trump’s administration to ban the sale of all non-tobacco-flavored e-cigarettes and similar plans and actions in a number of states.

In early September, the Trump administration announced that it was working on a policy that would bar the sale of any non-flavored e-cigarettes, including mint and menthol.

Around the same time—spurred by a number of illnesses believed to be linked to some form of vaping, including unregulated THC products—some states also announced their intentions to ban e-cigarettes.

In the wake of the ban’s announcement, Trump initially called vaping a “new problem,” but shortly after said that he liked vaping as an “alternative to cigarettes” but wanted to make it “safe for all.”

“While I like the Vaping alternative to Cigarettes, we need to make sure this alternative is SAFE for ALL! Let’s get counterfeits off the market, and keep young children from Vaping!” the president tweeted a few days after the announcement of the ban policy.

With a flavored vaping ban seemingly on the horizon, a number of people are making their concerns known around two rallying cries: We Vape We Vote and I Vote I Vape.

Most of the comments are about how a flavor ban would affect their life—but many also touch upon the potential voting power vapers could have in upcoming elections.

I would be VERY concerned about elections ⁦@realDonaldTrump⁩ ⁦@GOP⁩ if we made twitter accounts what do you think will stop us from voting, your flavor bans awoke and angered us. We vape, we vote’: How vaping crackdowns are politicizing vapers https://t.co/grRRbSLorO

We are NOT BOTS!
I vape I vote and I will not be forced by vile cretinous Politicians without principles or ethics to force me back to smoking. Any Public Health groups going along with these lies should be fired for abusing the publics trust & health. https://t.co/27OmCExY4q

The potential for vapers to be a political issue was noticed by at least some conservatives in the immediate aftermath of the ban announcement.

Axios reported in September that some conservatives have shown data to the White House about how the flavor ban could impact poll numbers. Essentially, the data showed that adult vapers in battleground states outweighed the margin that Trump won them by in the 2016 election.

“While parents may be concerned about e-cigarettes, the people who genuinely care about vaping as a voting issue so far outweighs the number of people Trump needs to win in 2020 that they are royally screwing themselves by doing this,” Paul Blair, of Americans for Tax Reform, told the news outlet at the time.

The day the ban was announced, the American Vaping Association warned in a press release that Trump could “sink his reelection efforts with push to harm millions of adult vapers.”

The Vapor Technology Association also has a website where people can “tell Trump hands off!” with the header: “I vape, I vote.”

Other accounts have been insisting that they are not bots after reports surfaced that Congress and the Massachusetts attorney general were investigating whether vaping manufacturers were using bots on social media to market their products.

Congress is shocked by the show of support from such a large family and industry. Making it much more difficult to shoot us all down. So much that they are trying to claim some supporters on social media are bots. No bots,passionate vapers. #WeVapeWeVote #flavorssavelives

@realdonaldtrump I vape and I vote! Hands off my vape! #VaperVoter

While it’s unclear whether a flavor ban would have a significant impact on the polls—such a scenario assumes nearly all vapers would vote based on one single issue—it’s clear that there are some voters out there who are trying to swing lawmakers away from banning flavored vapes.