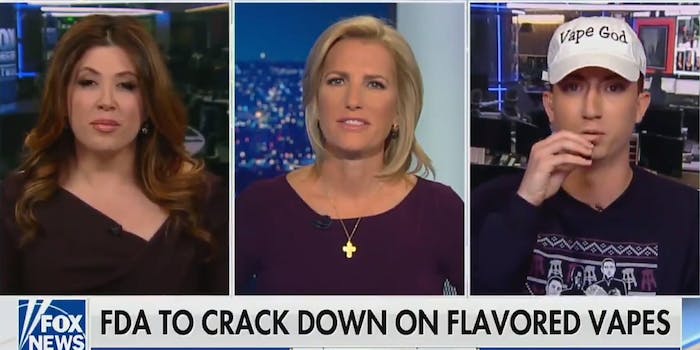 Fox News got trolled by a ‘millennial vaper’

A Barstool Sports blogger trolled Fox News during a segment on vaping Thursday by arguing in defense of blowing “fat clouds.”

Described by Fox as a “millennial vaper,” the 22-year-old Scibelli, who wore a “Vape God” hat, repeatedly hit his e-cigarette while praising the vaping lifestyle.

“They call me the ‘Colossus of Cloud.’ It helps my swag. It helps my drip. I just love walking around,” Scibelli said. “It’s really good for getting chicks, too. I started about a year ago and haven’t looked back since.”

As Dr. Nesheiwat attempted to explain the potential health risks associated with vaping, Scibelli could be seen hitting two Juul e-cigarettes at once, resulting in a small coughing fit on air.

“Tommy is over there gasping for air,” Dr. Nesheiwat said in response.

Scibelli called the coughing a “sign of strength,” pointing to the dangers of traditional cigarettes instead.

“Cigarettes are bad for you. I would never do anything that’s bad for your lungs or anything,” Scibelli said. “I just stick to Juul.”

After being told by Dr. Nesheiwat that the habit can also produce scarring and inflammation in the lungs, an issue referred to as “popcorn lung,” Scibelli responded by defending delicious popcorn.

Ingraham appears to have invited the Vape God on the show after stumbling upon a satirical video in which Scibelli shows off his “sick Juul tricks.”

Scibelli also offered additional insights on Twitter, revealing that producers may have failed to properly vet him prior to inviting him on the show.

Walked out of the room. Lady asked for my full name. Turned to someone else and said “did we do any research on this kid?”

The Fox segment comes as vaping and Juul, a leading manufacturer of e-cigarette products, face criticism from the FDA over their popularity among teens and children.

In an attempt to limit their products use among minors, Juul announced Monday that it would shut down several of its social media accounts in the U.S.