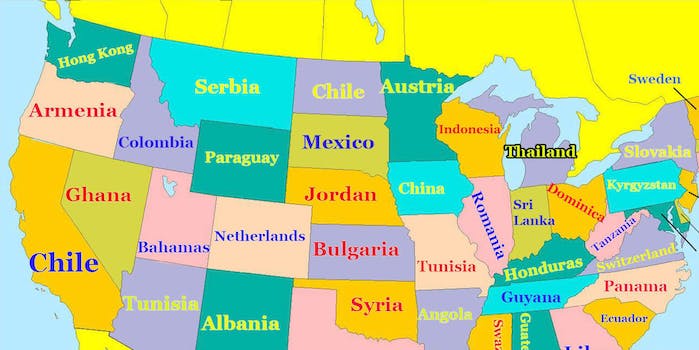 How does your state rank?

Americans like to think they are #1 in everything, but when it comes to education, the U.S. quickly loses boasting rights. Math and science are particularly rough: U.S. ranks 28th in the world for those subjects. Although we may be a developed nation, when education is broken down by state, we aren’t all that different from countries that are more economically challenged.

HomeSnacks.com used information from the U.S. high school graduation rates from the U.S. Census and compared them against the education index of each country from the United Nations Development Program.

The result? A map of the U.S. with each state renamed as the country that resembles their level of education. 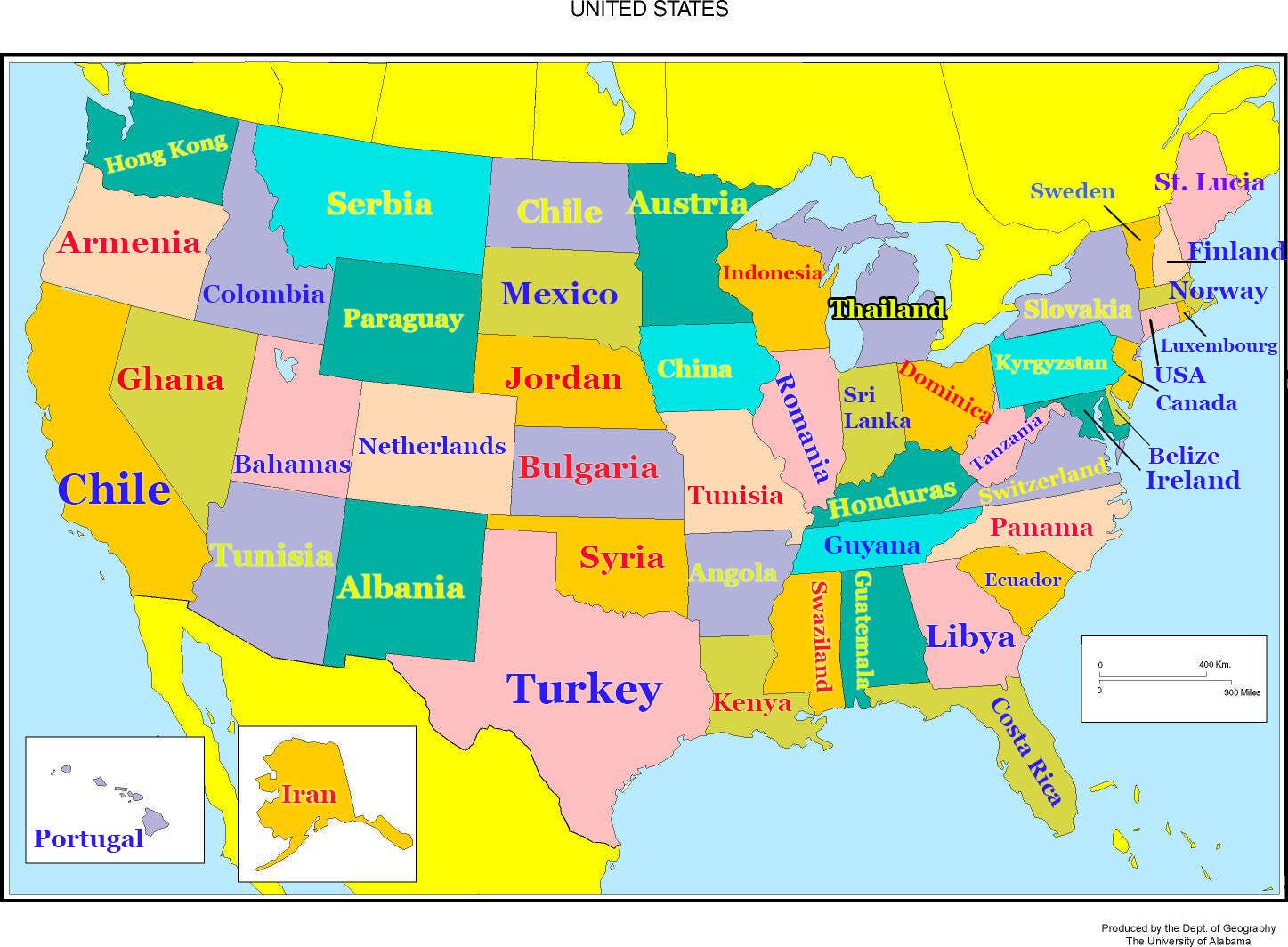 The Northwest is definitely the most diverse, and Colorado stands out in particular. The Centennial State matched the education level of the Netherlands, which is ahead of the U.S. in the education index. Colorado also ranked number two—just behind Massachusetts—as the state with the overall best school system in the nation, according toWallethub.

Wallethub also found that no surprisingly, schools with the highest spending on education had better school systems, while those that didn’t invest as much in education saw a dip in school quality. Arizona and Nevada are prime examples of this. Out of the 50 states, they ranked 48 and 49 respectively, and their matches were Tunisia and Ghana, which fall at 90 and 138 on the U.N.’s index. 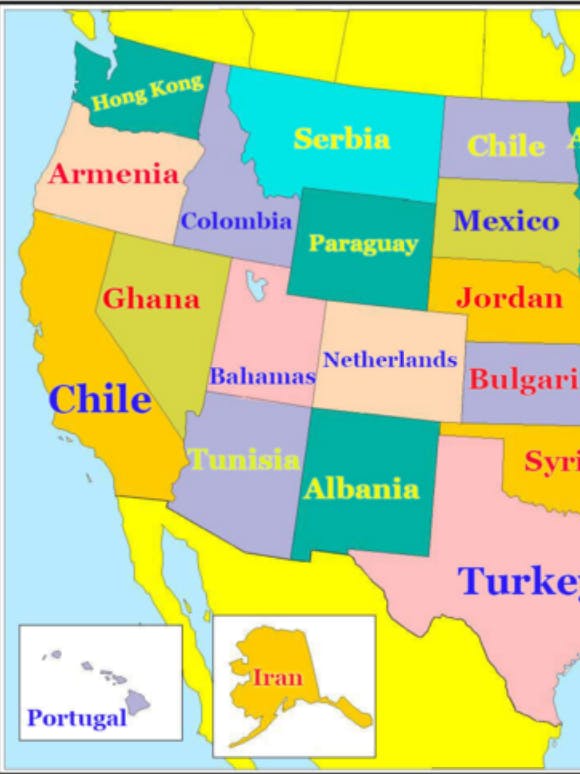 By contrast, Northeastern states are on par with the education of Scandinavian countries, which consistently come out on top. Finland (which matched with New Hampshire) has been praised as having one of the best and most effective school systems in the world. Their keys to success come from less and better standardized tests, less homework, free college education and higher expectations and treatment of teachers, according to Business Insider. It’s interesting to note that there is also no list of “best schools” in Finland; the Finns strive for equality so that each child is given a comparable education regardless of where they live or which school they go to, The Atlantic reported. 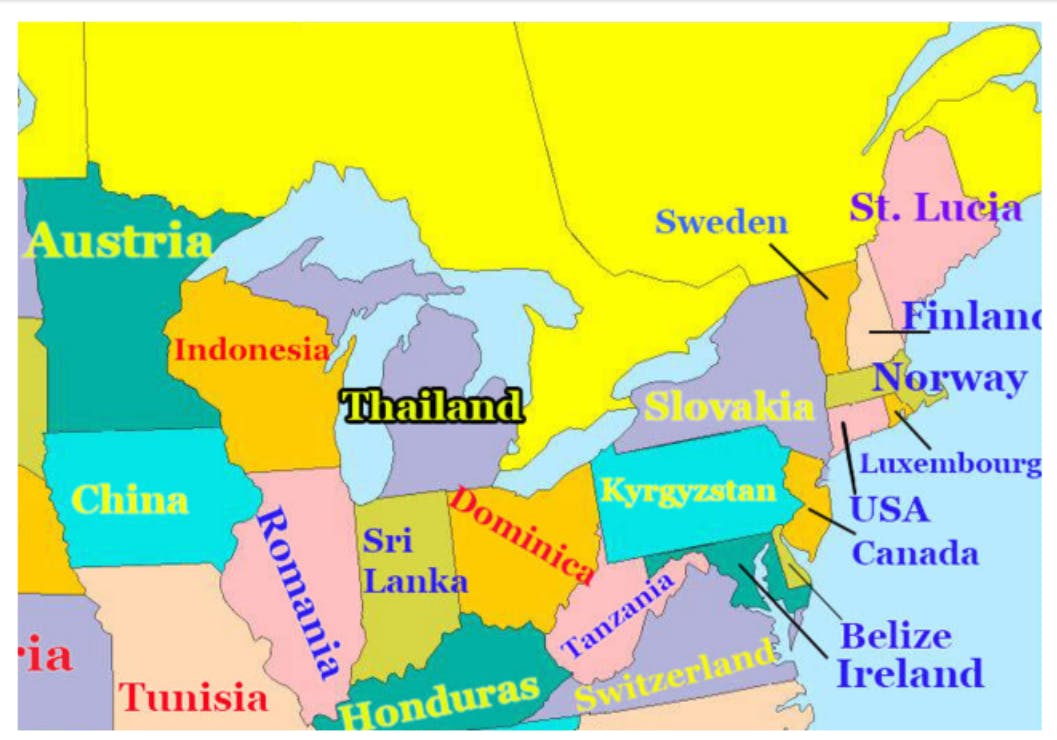 States in the Northeast also have a reputation as having some of the best schools in the country. For instance, Massachusetts ranks number one overall and all fives states with the highest reading test scores also come from the Northeast, according to Wallethub.

Why the America’s Education System Struggles

So despite being the seventh richest nation in the world, why do U.S. schools lag behind? It’s clear that some states are on par with countries that are much, much more economically burdened.

One reason is America’s repeated failure to invest in education. According to the US News, federal funding for education has fallen drastically. Congress has cut funding for K-12 education by nearly 20 percent since 2011—five times more than overall spending cuts.

Such was the case last year in Maryland. Despite massive opposition, last year Maryland Governor Larry Hogan diverted $68 million originally earmarked for schools into the state’s public employee pension program. As ATTN: reported the money would have come from a $200 million package set aside by Maryland lawmakers for top priorities including school funding, a cushion for state worker pay cuts and a host of health-care initiatives.

Moreover, some experts believe that the cost of education is the Achilles heel of the U.S.’ school system.

ATTN: reported last year that U.S. Secretary of Education Arne Duncan spoke to students at the University of Maryland, explaining that the country’s college system has failed to provide the majority of people with an affordable, high-quality education. He argued that “debt-free degrees” are “only part of the solution” to this problem and that federal and state governments should hold universities to a higher standard.

And while the U.S. High School Graduation rate hit a record high between 2012-2013 with an 81 percent graduation rate according to the U.S. Department of Education, some experts think the numbers are misleading. “The National Assessment of Educational Progress (NAEP), the largest standardized test administered in the United States, reports that fewer than 40 percent of graduating seniors have mastered reading and math and are poorly equipped for college and real world life. These students who are passed to the next grade are at a serious disadvantage and have an increased chance of falling behind and dropping out of college,” Matthew Lynch, an education policy researcher wrote in Education Week.

It’s evident that the U.S. has the resources to succeed, but changes have to occur in funding and curriculum for it to move up in rank.