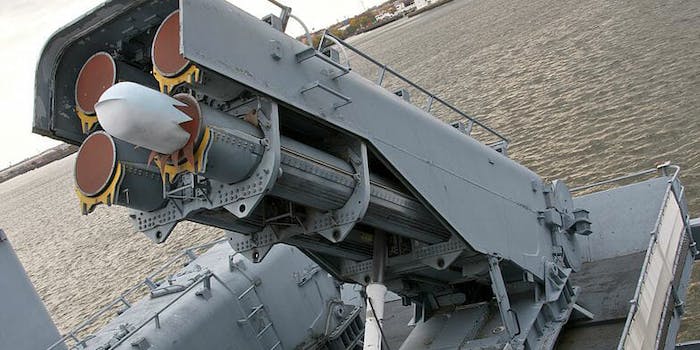 This marks the first direct action the U.S. has taken agains the Syrian government.

The United States government on Thursday launched its first direct attack against the Syrian government, a sudden policy reversal for the Trump administration that sets the stage for a new American-led conflict.

The U.S. launched its strike at 8:45pm ET, making it an early morning action in Syria, according to the Associated Press. The attack reportedly involved the launch of between 50 and 60 Tomahawk missiles, which targeted the Shayrat air base, a government-controlled facility. The extent of the damage and number of casualties is not clear at this time.

President Donald Trump called Assad’s attack “reprehensible” and “heinous,” while also taking a swipe at former President Barack Obama‘s policies on Syria. “Years of previous attempts at changing Assad’s behavior have all failed and failed very dramatically,” Trump said in a statement issued from his Mar-a-Lago resort in Florida on Thursday night.

Trump told reporters traveling with him at Mar-a-Lago, where he’s hosting Chinese President Xi Jinping for a two-day summit, that he ordered the attack in retaliation for the use of chemical weapons.

“It was a slow and brutal death for so many,” Trump said at a brief press conference Thursday night. “Even beautiful babies were cruelly murdered in the very barbaric attack. No child of God should suffer such horror. Tonight, I ordered a targeted military strike on the airfield from which the chemical attack was launched.”

Russia, an ally of Assad, currently has soldiers located at the Shayrat air base. According to multiple reports, the U.S. warned Russian military before launching the attack.

Secretary of State Rex Tillerson reportedly said of U.S. efforts to remove Assad from power, “Those steps are underway.”

In response to the attack, Assad called it an “aggression.”

Trump called on other “civilized” countries to support ending the bloodshed in Syria, as well as ending terrorism worldwide.