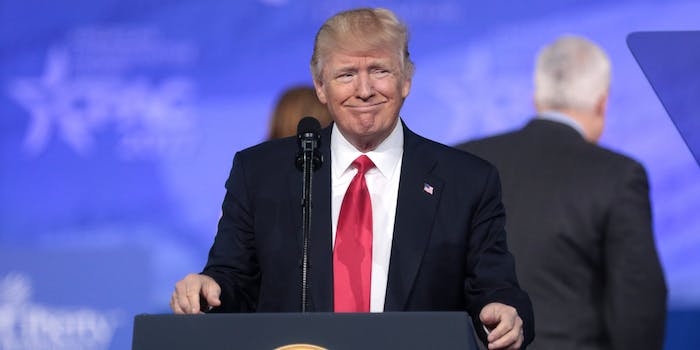 Professors acted on the school's rejection of student petitions.

Faculty members at Lehigh University in Pennsylvania voted to revoke the honorary degree given to President Donald Trump back in 1988, school officials announced on Tuesday.

More than 75 percent of faculty participated in an online vote which closed on Monday afternoon, with a majority of 83 percent voting in favor of rescinding the degree.

The decision to hold the electronic vote came as Lehigh professors brought pressure to the university’s Board of Trustees, who had rejected two previously circulated petitions on the matter. One ignored petition was launched by student and recent graduate Kelly McCoy in August and signed by 35,000 people following Trump’s response to the protest in Charlottesville, Virginia, in which one woman was killed by a man affiliated with the far right.

“The Board of Trustees remains committed to the university’s values and to its ‘­Principles of Our Equitable Community,’ which recognize each person’s right to think and speak as dictated by personal belief and to respectfully disagree with or counter another’s point of view,” the board said in a statement two months later, choosing to allow Trump to keep the degree.

Staff then motioned to proceed with an online vote because it would become part of the official university record and is less easily dismissed. The faculty initiative was reportedly launched in January, following the president’s comments on immigrants from “shithole” countries.

“[Trump] has through a series of well documented statements exhibited behavior antithetical to Lehigh values,” the motion argues. “These statements are unacceptable and provide strong evidence of an ongoing disregard for the values that are the foundation of this university.”

The Board of Trustees has yet to respond to Monday’s vote, but it is clear that both teaching staff and students are coming together on this issue with repeated and greater insistence.