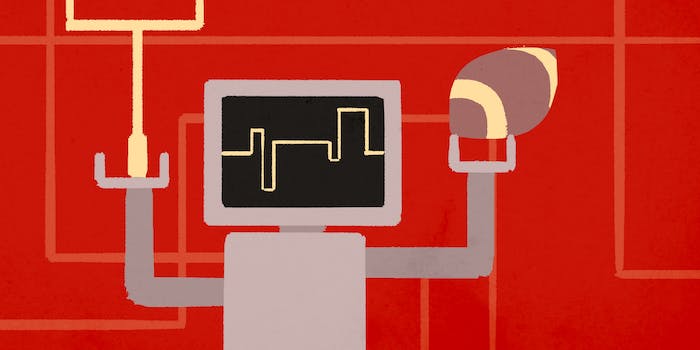 Here are the 2016 NFL playoff teams and Super Bowl champion, as predicted by a super accurate intelligence platform

Why even play the games?

There are no crystal balls when it comes to the NFL. It’s not uncommon for teams to jump from the back of the pack one year to being playoff contenders the next, and predicting which team will break out can be nearly impossible.

That is, it can be if you’re making the picks on your own. But artificial intelligence company Unanimous A.I. believes it can produce much more accurate predictions by tapping the power of group thinking.

That’s why the company created Unu, an online platform that allows people to congregate online and arrive at better answers together.

“We developed a technology called artificial swarm intelligence, which is all about tapping the inherent knowledge, wisdom, intuition of groups,” Unanimous A.I. CEO Louis Rosenberg told the Daily Dot.

“When a species wants to tap the collective intelligence of a population, they don’t take a poll, they don’t take a vote. They form a real-time system,” Rosenberg said. Inspired by groups found in nature like schools of fish or flocks of birds, Unu is designed to apply the principles of naturally forming hive minds to people.

Unu is set up like a gaming server where users login, browse for a lobby, and join. Once they enter a room, the users are shown a question and a selection of possible answers laid out on screen. An animated, glass-like puck is shown in the center of the screen and is dragged to an answer by magnets representing the input of users.

As the exercise goes on, influence from the participants can change.

“They’re negotiating in real-time to find the solution the group can best agree upon. We’re allowing you to explore the space of possible decisions and find the one decision that optimizes the correctness confidence,” Rosenberg explained.

And that decision is usually different than what is produced by taking a simple vote. Rosenberg said a vote or a poll might provide the most popular choice, but it’s not necessarily the same thing as finding the choice most people feel confident about.

It sounds a bit hokey—and even looks that way when watching the interface in action—but it’s hard to argue with its results.

For this year’s Oscars, Unanimous A.I. gathered a group of about 50 people who identified as “movie enthusiasts” and asked them to predict the winners of each award category.

When Unanimous A.I. was challenged to predict the results of the Kentucky Derby, the company put out a call for horse racing fans to pick the winners of the race. The group of 20 managed to pick not just the winning horse, but the top four finishers—an accomplishment known as a superfecta. The odds of hitting all four horses in order was 540-to-1, a bet that would turn $20 into $10,800.

While the 20 horse racing fans managed to hit the superfecta as a group, they fared much worse as individual bettors. Not a single one managed to get all four horses—or even more than two—correct on their own. A standard poll of the users would have only produced one correct pick, according to Rosenberg.

While predicting the Kentucky Derby or Oscar winners with such accuracy might be impressive, it’s also much more immediate; the groups didn’t have to predict which films and actors would be nominated, nor which horses would make it into the race.

So just how good will the collective “brain of brains” be at guessing the outcomes of the NFL season? We tasked Unanimous A.I. to provide predictions on how the 2016 season will shape up.

Over about a twenty-minute session on Unu, Unanimous A.I. created swarms of between 25 to 30 users. The participants were 63 percent male, 37 percent female, and had an average age of 34. The sample was surprisingly similar to those of the NFL’s actual viewer demographics, which is 65 percent male—though the average viewer of standard broadcasts skews a bit older.

In the AFC, the swarm took the New England Patriots to top the East division despite missing quarterback Tom Brady for the first four games of the season. A small contingent of believers in the Buffalo Bills were unable to sway the rest of the swarm away from giving the Patriots their eighth straight divisional title.

The swarm gave the Kansas City Chiefs the division crown in the AFC West. That will require the team to top the defending Super Bowl champion Denver Broncos—now starting Trevor Siemian at quarterback—and the Oakland Raiders, the favorite breakout pick of many experts.

Unu users gave the AFC North to the Pittsburgh Steelers despite a strong bit of initial dissent by those who believe the Cincinnati Bengals will repeat as division champions.

In the AFC South, the swarm took to the Indianapolis Colts, led by quarterback Andrew Luck. The race for the division title was a competitive one, with users pulling in just about every direction. It appeared that the swarm believed the Houston Texans and Jacksonville Jaguars will also be competitive.

The two wild card playoff births were given to the Denver Broncos, likely favored on the strength of their defense alone, and Houston Texans. The Bengals were the only team to make the playoffs in 2015 to be predicted to miss out this year.

In the NFC East, which appears to be wide open since Dallas will be without quarterback Tony Romo for a good chunk of the season, Unu users took to the New York Giants as the favorite.

Despite what is sure to be one of the more competitive divisional races in football, the swarm gave the Seattle Seahawks the advantage in the NFC West ahead of last year’s champions, the Arizona Cardinals.

The Green Bay Packers were projected to re-take their position atop the NFC North after surrendering the division crown to the Minnesota Vikings last year. The Vikings, now without quarterback Teddy Bridgewater for at least one season (assuming his leg doesn’t completely fall off), may still salvage their season with Sam Bradford under center, but the Packers were runaway favorites for the division.

Super Bowl runners-up last year, the Carolina Panthers were predicted to continue their dominance of the NFC South with little dissent among the swarm.

Unu participants slotted the Arizona Cardinals and Minnesota Vikings into the two wild card spots. The predictions keep the NFC side of the playoff bracket for 2016 similar to the year prior. The Giants, taking the place of Washington’s football team, are the only new team to appear.

According to the swarm, the Steelers will emerge from the AFC as champions. In the NFC, the Packers are predicted to come out on top. That left a rematch of Super Bowl XLV for Super Bowl LI, set to take place in NRG Stadium in Houston, Texas.

Though the rosters of the Packers and Steelers have seen plenty of turnover since they last battled for the Lombardi trophy five years earlier, the same quarterbacks man the offenses, with Aaron Rodgers leading the charge for the Packers and Ben Roethlisberger taking snaps for the Steelers.

The swarm on Unu picked Rodgers and the Packers to once again come away with the win, giving the quarterback his second Super Bowl ring.

The choices aren’t particularly bold—the Packers are currently sitting at 8 to 1 odds and Pittsburgh at 10 to 1 odds in Las Vegas—but it doesn’t have to be.

Though the NFL is touted as having more parity in its ranks than most professional sports, there’s a fair amount of evidence to suggest that isn’t the case. If anything, it’s a somewhat artifical effect created by shorter schedules. The smart bet is that the best teams manage to find ways to win.

And according to the swarm and Vegas bookmakers alike, the Packers are likely to find a way to win. Cheeseheads, start celebrating.

As for fans of the other 31 teams in the league, your squad might not bring home a championship, but you might be able to take solace in some successful bets courtesy of Unu’s insights (not that you should gamble, seeing as it’s illegal and all).