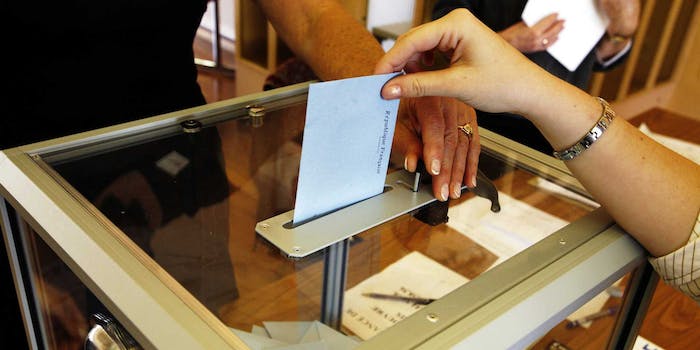 Procrastination in action: Half a million Brits registered to vote on the last day before the deadline.

Just under half a million people registered to vote online in the last 24 hours before the U.K. election‘s registration deadline. The resulting graph is a perfect illustration of procrastination on a national scale.

The British government introduced the new voter-registration system last June, giving people a simple way to register online before the election on May 7. The 11-step form takes about five minutes to complete and only asks for basic information like one’s name, address, and national insurance number (the U.K. equivalent of a U.S. Social Security number). If you don’t know your N.I. number, you can actually write “I don’t know” and your local council will find it for you.

The process makes registering to vote very easy—so easy, in fact, that about 469,000 people waited until the last day, April 20, to complete it. The registration site’s daily statistics graph is a telling reminder of humanity’s proclivity for procrastination.

The last-day registration push was the result of media campaigns and publicity from celebrities including Doctor Who‘s Christopher Eccleston and Queen guitarist Brian May.

The government set up the online registration page in part to encourage young people to register, and the effort appears to have produced results. The page was consistently popular among 25- to 34-year-olds, who made up 152,000 of the people registering on April 20. The second-largest group consisted of people aged 16 to 25, some of whom will not even be old enough to vote in this year’s general election.

Some 7.1 million people have registered online since the site went live last summer. That’s not too shabby for a country where only 29.7 million people voted in the last election.