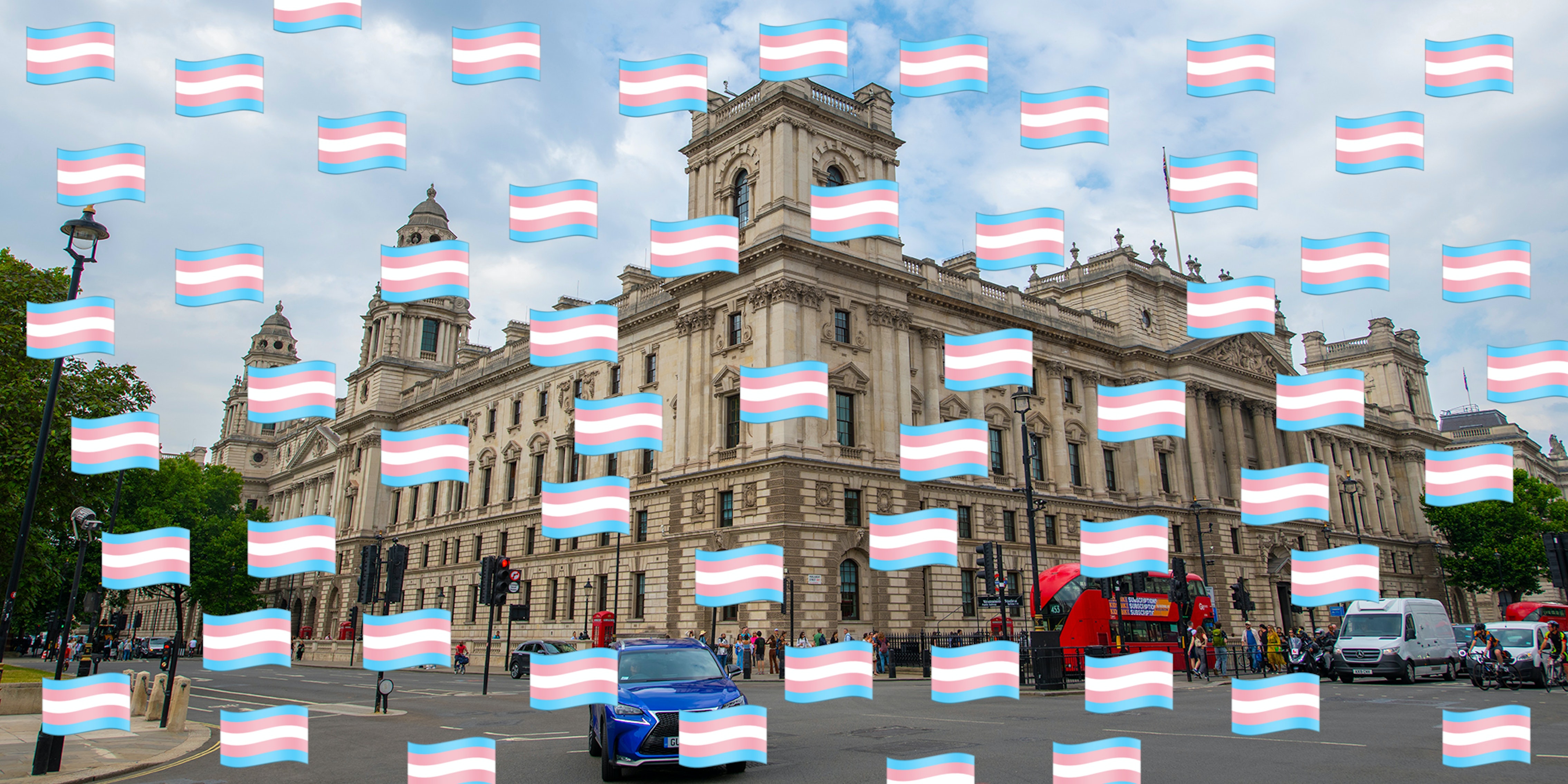 Why the U.K. Treasury is being bombarded with trans flag emojis

It is the only way people can push back.

Britons angry with the purported anti-trans stance of their government have been showing their unhappiness in one of the only ways possible online: by bombarding any post on the U.K. Treasury’s Discord with a wave of pro-trans emoji.

The unusual protest, which sees every missive sent by His Majesty’s Treasury responded to with the trans flag emoji at a rate higher than any other emoji, highlights the opposition to the U.K.’s record on trans rights, a novel way for users to register their disapproval of how the government is acting.

The Treasury set up the Discord server in mid-November, although it made sure to make it read-only, despite Discord’s tagline of “Your Place to Talk and Hang Out.”

Shorn of the ability to speak out on the server, those supporting trans rights have instead shown their dissent through emoji. One post, shared on Jan. 19, was hit with 730 clown emoji and 464 thumbs down emoji—both of which were far outstripped by the 1,178 uses of the trans flag emoji.

Among them is 21-year-old Hollie, who described herself as an ally of the trans community because many of her friends are trans.

“I joined the HM Treasury Discord server to actively troll them,” Hollie said. “I do have a lot of trans friends that I actively support all the time. And they also felt really horrible about the new changes to the law and how gender identity is just being ignored by the government. As an ally, I wanted to stand up to that, because I’ve been seeing my friends really upset.”

The issue of equality for trans people has become a pressing human rights issue in recent years in both the U.S. and the U.K. But the political fight has also now become part of a broader culture war as anti-trans advocates grow more vocal.

Alongside anti-trans campaigns by right-wing politicians in the U.S. and the online hounding of trans people by high-profile Twitter accounts like Libs of TikTok and J.K. Rowling, there are more fundamental problems in the U.K.

Scotland, one of four nations within the United Kingdom, recently tried to pass a law that would lower the age at which people are legally able to change their gender from 18 to 16, as well as remove the need to obtain a medical diagnosis of gender dysphoria in order to change gender. The U.K. government stepped in to block it last week, putting in peril Scotland’s right to devolved power, which it has had since the 1990s.

It’s notable that alongside using the trans flag emoji, which remains the most popular on almost all of the Discord’s posts, campaigners have also started using the Scottish flag emoji.

On a Jan. 19 post announcing a visit by the U.K. prime minister and chancellor to Accrington, a town in northern England, 449 people reacted with the Scottish flag as well as the 1,178 transgender flags.

Using the emoji is the only way on Discord that people can register their dissatisfaction with the government’s anti-trans policies, said Hollie. “You do not have a right to talk in the server,” she said. “They actively have every single channel as a view-only channel, which was really annoying for us, because yet again, it’s stopping people from talking and stopping people from saying what they want.

The Treasury Discord has become one of the main lightning rods for criticism among the tech-literate, gaming-leaning online community, as it is the only government department to have a Discord.

“There is free speech,” said Hollie. “But on their side, it’s free speech until it isn’t. That’s how I felt when I went into the Discord server.”

A U.K. Treasury spokesperson told the Daily Dot: “The Treasury’s Discord server is read-only in order to provide a safe experience for its nearly 60,000 members. Members can still interact with our updates through a wide range of emoticons—with Larry the Cat and the thumbs up being other popular choices.”

Protest, though, finds a way. The use of the flag emoji is a quirky, subversive way of showing dissent, said Phoenix CS Andrews, a trans writer and researcher writing a book on politics fandoms. “The trans approach to ratioing—being funny and absurd instead of aggro—is too often associated with Keffals when Brits have been doing it for years,” he said. “It’s international, it’s daft and it makes its point without making community managers’ lives hell, or adding to the pain of marginalized people.”

Andrews says the trans attitude to showingd dissent or disagreement contrasts starkly with the brigading deployed by gender-critical campaigners on the other side of the argument.

“There the person managing the socials is met with abuse, harassment, explicit imagery, and accusations of pedophilia,” Andrews said.