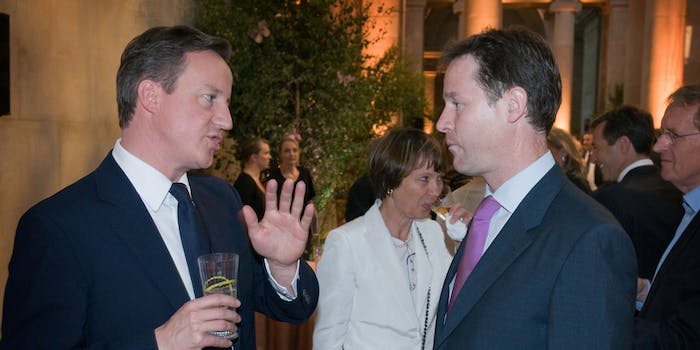 What you need to know about the 2015 U.K. election

As with all major political events in the U.K., the upcoming general election is rife with second-hand embarrassment, usually deployed by socially awkward middle-aged men.

The 2015 election, which takes place on May 7, will decide which party (or, more likely, parties) will govern for the next five years and who will be prime minister. As a piece of political theater, it leaves something to be desired. Election season lasts for a mere six weeks (which probably sounds like nirvana to many U.S. citizens, who are already tired of 2016 presidential speculation) and is decidedly lacking in glitz and drama. However, the fallout after the election may be very interesting indeed, as two or more parties will be forced to form a coalition government.

Let’s take a look at the main contenders.

As current prime minister and leader of the Conservative party, David Cameron is one of the two men in the running to be the next PM. He’s posh, slick, and arguably the best at PR out of the main party leaders.

A break from campaigning on Easter Sunday to try my hand at feeding a newborn lamb at Dean Lane Farm, Oxfordshire. pic.twitter.com/wxeXv2bT6t

Shortly after taking those photos with baby lambs, he visited the Game of Thrones set and fondled King Joffrey’s crossbow: a perfect illustration of his dueling images as a likable family man and a peasant-hating aristocrat.

Cameron is disliked by about half the country thanks to his government’s cost-cutting austerity policies, which have led to public protests and an increase in food poverty across the country, and even being blamed for the deaths of several disabled or otherwise vulnerable people. To make matters worse, the Conservatives made a concerted effort to scrub their pre-election policies from the Internet. However, many people still feel that austerity is still the best way to strengthen Britain’s economy, which means cutting funds for public services.

The Conservatives have been polling neck-and-neck with Labour all year and are currently predicted to win around the same number of parliamentary seats. At this point, it could still go either way.

Ed Miliband, leader of the Labour party, is the other serious option for PM. He’s so socially awkward, it’s kind of astonishing that he’s made a career in politics, although some people see this as preferable to Cameron’s well-practiced brand of charm.

Labour was traditionally a left-wing party with a strong backing from unions and working class activists. But over the past few years, it’s drifted toward the right. This, coupled with the party’s lack of exciting leadership, has led to many Labour voters moving to other parties—especially in Scotland, which we’ll get to in a second.

While the Conservatives have a lot of wealthy donors behind the scenes, Labour boasts more celebrity backers such as J.K. Rowling, Eddie Izzard and Sherlock star Martin Freeman, who recently recorded an ad for the party.

Incidentally, TV ads work very differently in the U.K. than in U.S. politics. Major parties are given a five-minute time slot for something known as a “party political broadcast,” which usually takes the form of a televised manifesto/campaign ad. The most interesting one this year is definitely the Green Party’s, which is either hilarious or embarrassing depending on your point of view. Instead of doing a traditional ad, the Greens spent their limited funds on a satirical musical number that casts the four main party leaders as a smug boyband.

Britain was a two-party system until recently, with the center-left Liberal Democrats coming in at a distant third. Usually either Labour or the Conservatives are in power, but the current government is a Conservative/Lib Dem coalition with Clegg as the Deputy PM.

Clegg’s 2010 campaign was youthful and optimistic, but quickly went down the plughole as soon as the election was over. As soon as they teamed up with the Tories, the Lib Dems were perceived as abandoning election promises, such as the flagship policy of freezing university tuition fees. These Google search terms are a pretty accurate summary of his public image since then: “Is Nick Clegg toast?”

When it became clear in 2010 that tuition fees would indeed be raised, there were protests across the U.K., and the Lib Dems lost a lot of supporters almost overnight. They are now polling between 6 and 10 percent of the vote, significantly behind the U.K Independence Pary (UKIP) and only just ahead of the Green Party. Clegg may also lose his own parliamentary seat this year.

Farage is either a gaffe-prone disaster, a genius self-publicist, or both. As leader of the right-wing anti-immigration U.K. Independence Party, he spends much of his time fielding apologies for UKIP politicians who have been caught saying something racist, homophobic, or otherwise offensive. The rest of the time you’ll find him on TV panel shows and posing for photo ops with a pint of beer in hand.

UKIP’s many micro-scandals haven’t hurt their polling numbers, mostly because Farage is so adept at presenting the party as a fresh alternative to “politics as usual,” rather than a Conservative splinter group (which, arguably, is what UKIP actually is).

UKIP is running on a broadly libertarian/conservative platform, with a particular focus on anti-Europe and anti-immigration sentiment. They’re often credited with skewing political discussion to the right, although their biggest influence may be on the format of those debates.

As a result of UKIP’s growing popularity and Farage’s constant media appearances, TV channels were pressured to include more minor parties in televised debates. The biggest was a seven-way debate between the top four parties, the Greens, and representatives from the Welsh and Scottish independence parties. There is no one-on-one debate scheduled for the two candidates most likely to become prime minister, although Cameron and Miliband did participate in an audience Q&A last month.

The next U.K. parliament may be decided by Scottish voters.

Scotland has voted Labour for decades, but last year’s independence referendum led to some drastic changes. While Scottish voters chose to remain part of the U.K., the independence campaign led to a massive surge in popularity for the Scottish National Party (SNP). Meanwhile, Labour has been steadily losing favor among its base of working-class Scots.

Today's news: FM @NicolaSturgeon calls for Labour to join with SNP to lock the Tories out of Downing Street #VoteSNP pic.twitter.com/WfEZB559zz

The SNP are projected to win at least 45 of Scotland’s 59 seats, and most of those seats are coming from Labour. This means the SNP is likely to become Britain’s third party, which for obvious reasons is not a popular development in England—especially among Conservative voters. Nicola Sturgeon has already said she would actively block David Cameron from becoming prime minister if the Conservatives fail to get a majority.

In order to form a majority government, a party needs to win at least 326 of the 650 available seats. Both Labour and the Tories are predicted to win fewer than 300 seats apiece, meaning another coalition government is almost inevitable. U.K. media outlets are doing their best to figure out what that coalition might look like, but since the party leaders will be at loggerheads between now an the election on May 7, your guess is as good as anyone else’s.

Photo via innotata/Wikimedia (CC BY 2.0)