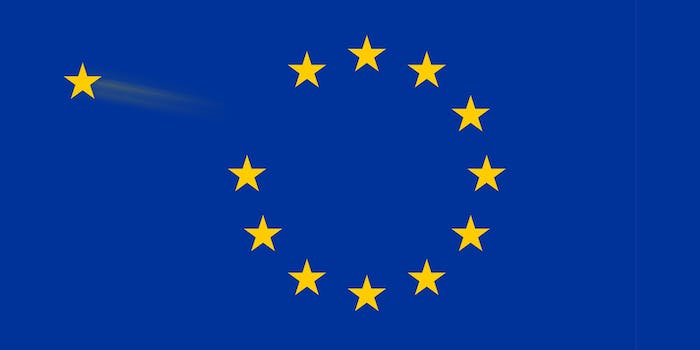 It's already had a negative effect on the U.K. economy.

In a historic vote on Thursday, the U.K. voted to leave the European Union. The referendum results have already prompted the value of the Great Britain Pound to plummet to a 31-year low and the resignation of U.K. Prime Minister David Cameron, to say nothing of the potential worldwide ramifications.

Better known as Brexit, the motion to leave was passed 52 percent to 48 percent, with many of those voting for Brexit citing immigration fears and the economy as contributing factors. Supporters applauded the vote while world leaders like German chancellor Angela Merkel called it “a blow to Europe.”

For those just waking up who are unaware of what Brexit is, John Oliver has a primer on the referendum and why he believes that voting for Brexit is a terrible idea. The segment was blocked from airing on Sky Atlantic in the U.K. until after the referendum because of “broadcast neutrality rules,” although some people suspect it had something to do with Sky Atlantic’s owner, Fox News’s Rupert Murdoch, not wanting the anti-Brexit argument to air.

Google searches for Brexit-related questions spiked in the past 12 hours with people trying to find out what will happen to the U.K. now that it’s voted to leave the EU.

+500% spike in searches for "buy gold" in the past four hourshttps://t.co/pmMsRUcAwK

"Why did Britain leave the EU?" – Top questions on the UK globally are all about the #EUref and #EURefResults pic.twitter.com/NwuypqcNtD

+100% spike in UK searches for "getting an Irish passport" after #Brexit votehttps://t.co/qyssi0v91x pic.twitter.com/aUdHplLMaS

"What is the EU?" is the second top UK question on the EU since the #EURefResults were officially announced pic.twitter.com/1q4VAX3qcm

The debate over Brexit occurred online and offline, at one point resulting in a bizarre boat standoff in the river Thames. Tensions ran high leading up to the vote, with lawmakers facing terrifying threats to their safety over their political leanings.

The risk was made all the more apparent following the murder of Labour MP Jo Cox, a lawmaker who was strongly against Brexit. Cox’s death was carried out by a man who had links to the far-right and gave his name as “Death to traitors, freedom for Britain” when asked by the court charging him with murder.

Nigel Farage, the leader of the United Kingdom Independence Party who led the efforts to leave the EU and has been criticized on more than one occasion for his racist rhetoric claimed that “We won it without firing a bullet.” Farage’s remarks incensed voters, who were quick to cite his insensitivity in the face of Cox’s murder. Voters also took issue with Farage calling a Brexit victory “Independence Day.”

A woman was literally killed over this. https://t.co/DaXPp185jj

Farage also said he can’t guarantee the £350 million that went to the EU will now go to the NHS (the U.K.’s national health care system), which was one of the campaign’s promises.

WATCH: @Nigel_Farage tells @susannareid100 it was a 'mistake' for Leave to claim there'd be £350M a week for NHShttps://t.co/JNkl5k8IlK

The political fallout has even reached the highest office in the land. Standing in front of 10 Downing St. on Friday morning, Cameron said that he will step down from his position in October. In calling for the referendum—which he didn’t support—and losing, some believe that Brexit will become Cameron’s legacy.

“I will do everything I can as prime minister to steady the ship over the coming weeks and months,” Cameron said. “But I do not think it would be right for me to try to be the captain that steers our country to its next destination.”

Former London mayor Boris Johnson, a Brexit supporter, is among the list of potential replacements to Cameron.

Presumptive Republican nominee Donald Trump, having just arrived in Scotland to visit his golf courses, applauded the efforts and promised to take America back like the U.K. did. Dissenters were quick to point out that Scotland largely remained to stay.

Just arrived in Scotland. Place is going wild over the vote. They took their country back, just like we will take America back. No games!

While the U.K. overall voted to leave, support to remain in the EU was especially strong in Scotland and Northern Ireland—with “Remain” receiving 62 percent of the vote in Scotland alone. Scotland First Minister Nicola Sturgeon pledged to explore all available options to stay in the EU, including holding another referendum for Scotland’s independence; the most recent attempt for Scottish independence failed in 2014.

Sinn Fein, Northern Ireland’s biggest nationalist party, is now calling for a vote on uniting Ireland, which is still in the EU.

“We now expect the United Kingdom government to give effect to this decision of the British people as soon as possible, however painful that process may be,” the statement read. “Any delay would unnecessarily prolong uncertainty. We have rules to deal with this in an orderly way.

The U.K. has yet to start the process of leaving the EU, but some people are already fearing what that will mean for them and just how far the U.K. has set itself back with Brexit—and some people who voted for Brexit are already expressing regret.

With leave voters in Manchester for BBCNews -most told us they woke up thinking "what have I done?" & didn't actually expect the uk to leave

J.K. Rowling, a staunch supporter of Remain, lamented “I don’t think I’ve ever wanted magic more.” Some of those in the Remain camp expressed grief at the referendum’s outcome and are mourning the future of their country and the xenophobia that may come out of it.

THIS is how the #Brexit is really affecting us: pic.twitter.com/cNKCub5dEN

The value of the GBP has dropped significantly as the outcome of Brexit became known, something that investment experts had predicted. And, with a hit of $130 billion from British banks, it’s the lowest rate since 1985 and an even worse blow than the worldwide financial crisis of 2008.

What happened when I asked UKIP MEP David Coburn if he was concerned about the value of the pound plummeting. pic.twitter.com/aZY1UYmhti

This story is ongoing and we will update when new information is available.