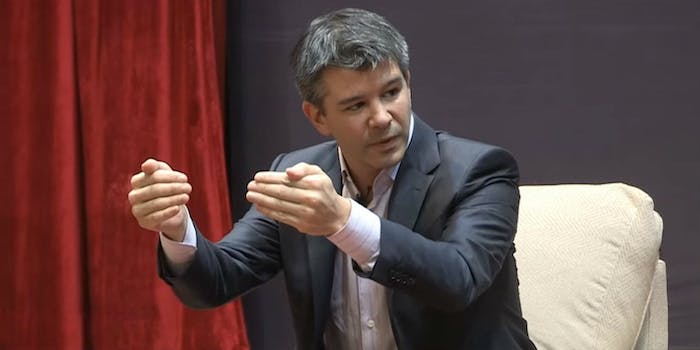 The note was unearthed as the company braces for the results of investigations into sexual harassment.

Beleaguered Uber CEO Travis Kalanick reportedly sent a letter to employees setting rules for having sex with co-workers at a company party in 2013.

According to a report from Recode, in what is internally called the “Miami Letter,” Kalanick instructed workers to not have sex with each other at Uber’s Miami party unless:

a) you have asked that person for that privilege and they have responded with an emphatic “YES! I will have sex with you” AND
b) the two (or more) of you do not work in the same chain of command.

He followed those rules by letting his 4,000 co-workers know he would not be having sex with any of them, “Yes, that means that Travis will be celibate on this trip. #CEOLife #FML.”

Written in plain frat-bro speak, the unusual email begins, “Titled: “URGENT, URGENT – READ THIS NOW OR ELSE!!!!!,” and “You better read this or I’ll kick your ass.”

It’s not the language you would expect from a CEO, but it’s a lot less surprising in light of his recent controversies, including a video of him berating one of his own drivers in late February.

Kalanick went on to write a list of do’s and don’ts that would fit in only the worst fraternities’ pledges. He writes, for example, that workers lives should not start or end at the party, and that large kegs should not be thrown from tall buildings. He also said there was a $200 “puke charge for any public displays on the Shore Club premise.” Then, with incredible foresight, Kalanick emphasized to employees they should not speak with the press.

Some of the gems in the DO list include, “Have a great fucking time,” “meet as many of your fellow uberettos as you can” (I include this because uberettos is a ridiculous term), and “Miami’s transportation sucks ass. #Slang as many Miamians, drivers, influencers as you can…every slang matters.”

We can give Kalanick a pass for overusing hashtags in 2013, but his use of “slang” is either nonstandard vocabulary or means “to abuse with harsh or coarse language,” according to Merriam-Webster. Let’s hope it is also uberetto talk for influence.

Unsurprisingly, sources tell Recode that Kalanick was advised not to send out the email because of its immature tone. But Kalanick sent it to all 400 or so employees, and then again in 2014 to 1,800 employees.

The timing of this release is particularly striking given the ongoing investigations into sexual harassment at the company following allegations made by a former female engineer. The email floated to the surface as two law firms—Perkins Coie and Covington & Burling—work to determine the extent of sexual harassment at Uber. The two firms are looking at whether the letter helped create a party atmosphere at the company, according to the Recode report.

Uber has already fired 20 employees following the initial investigation results from Perkins Coie. The company is still waiting on the much-anticipated results of an investigation conducted by former U.S. Attorney General Eric Holder. Those results should be revealed in the coming weeks.