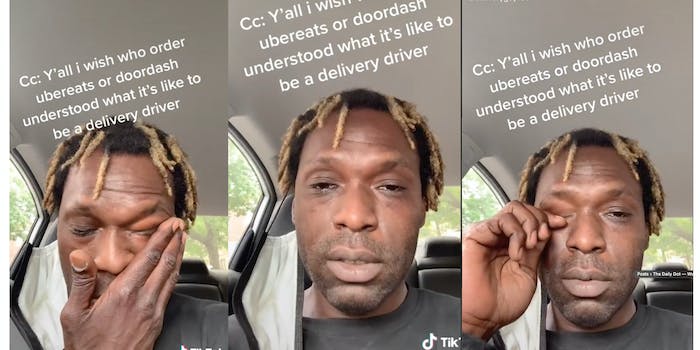 ‘Why does the burden always fall on the consumers instead of these corporations?’ Uber Eats driver cries after getting low tip in viral TikTok

An Uber Eats driver posted an emotional video to TikTok where he revealed how little a customer had tipped after driving an hour to get their food.

In the video, user deliveryguy100 starts by saying he wishes people knew what it was like to deliver for Uber Eats and similar apps. He talks while seated in his car with a face mask hanging on his ear and visibly crying.

He says Uber Eats, meanwhile, only paid him $2 to make the delivery.

“That’s not even enough to cover gas!” he exclaims.

The now-viral video seems to resonate with several commenters on TikTok.

“Say it with me: PEOPLE DESERVE LIVABLE WAGES & DON’T ORDER IF YOU CAN’T TIP,” one person wrote.

Others, though, took the opportunity to slam Uber Eats. Some argued it wasn’t the customer’s job to tip—but rather the onus is on the company to make sure it’s paying its drivers living wages.

“Hate seeing u cry,” someone said. “I always tip but y’all gotta turn that energy to DoorDash.”

“Why does the burden always fall on the consumers instead of these corporations?” another wrote. “I really don’t get America’s culture.”

Of course, this isn’t the first time a food delivery driver has complained about paltry tips. Earlier in 2021, a second Uber Eats driver posted a similar TikTok saying he was close to homelessness. He later received thousands of dollars in donations.

The Daily Dot has reached out to Uber.