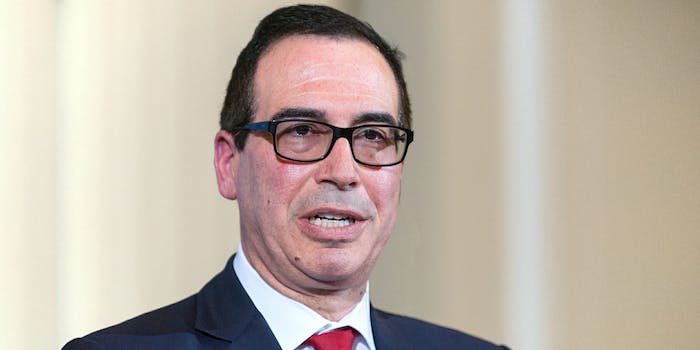 Twitter users appear unwilling to give up their hard-earned coin.

The U.S. Department of the Treasury is begging Americans on Twitter to turn in their spare change.

In a tweet on Tuesday, Treasury Secretary Steve Mnuchin pleaded with users to dig into their pockets and under their couch cushions to look for loose coins.

“If you have extra coins at home, please use them to make purchases— or deposit them at the bank or exchange them for cash,” Mnuchin tweeted. “Help get coins moving!”

But Twitter users weren’t ready to give up their hard earned change, or at least they were’t willing to listen to Mnuchin.

Users began showing off their coin collections in response, daring Mnuchin, in very American fashion, to come and take it.

“I have a huge jar chock full of pennies and you can’t have them,” @Chinchillazllla said.

Others just criticized Mnuchin for asking the country to give up their coins as millions struggle amid the coronavirus pandemic.

“That’s a really good idea. Do you have any extra gold bricks in one of your 10 vacation homes?” @Merv515 asked. “Perhaps melt one of those down to coins and share them with the ‘forgotten American worker.'”

Some just spammed photographs of Mnuchin at his job holding sheets of cold hard cash.

Not everyone has legal U.S. tender though. Twitter users also presented their other coins for approval.

“All I got Mr. Mnuchin,” @trustfundlefty said, presenting a game token.

The insults and criticisms kept coming, with many discussing Mnuchin’s vast wealth while vowing to destroy their own coins.

“Sorry, Steve, my enormous surplus of coins will be buried with me and my cats, as per family tradition,” @longwall26 said.

Mnuchin’s request comes as the nation does face a legitimate a coin shortage due in large part to businesses being shut down as a result of the pandemic.