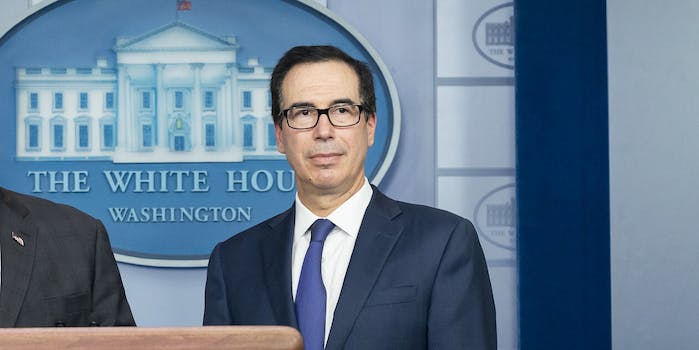 His comments didn't go over well.

Treasury Secretary Steven Mnuchin on Thursday said the spike in people claiming unemployment amid the coronavirus emergency are “not relevant” because of a relief passage making its way through Congress.

Mnuchin made the remarks during a CNBC interview on Thursday. The United States Department of Labor announced on Thursday that 3.28 million people filed unemployment claims in the week ending on March 21, citing the coronavirus emergency as a reason for the uptick.

“To be honest with you, I just think these numbers right now are not relevant,” Mnuchin said on CNBC. “Whether they’re bigger or smaller in the short term, obviously there are people who have jobless claims, and again, the good thing about this bill is, the president is protecting these people. Now with these plans, small businesses hopefully will be able to hire back a lot those people. Last week they didn’t know if they had any protections. They didn’t have any cash, they had no choice. Now with this bill passed by Congress, there are protections.”

Late Wednesday, the Senate passed a $2.2 trillion emergency relief bill that would send checks to hundreds of millions of Americans. The House of Representatives is slated to vote on the bill on Friday.

Mnuchin’s remarks about the unemployment claim numbers being “not relevant” struck a chord with people on Twitter—many of whom were not happy.

“These unemployment #s are in fact extremely relevant, @stevenmnuchin1. Millions of people lost their livelihoods. Which also means millions lost their health insurance. If moments like this don’t reveal the urgent need for #MedicareForAll, I don’t know what will,” the lawmaker tweeted on Thursday.

The relief bill is expected to deliver one-time payments of $1,200 to low- and middle-income Americans, as well as offer extended unemployment benefits.