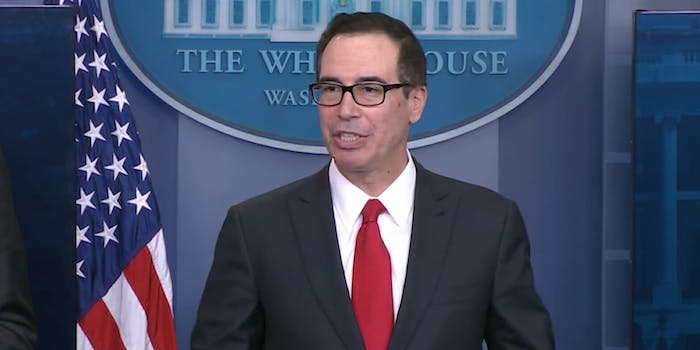 U.S. Treasury Secretary Steve Mnuchin said on Wednesday that his account was used by someone who was not authorized to do so, after people noticed he retweeted a tweet critical of General Motors.

“A retweet was posted last night on @stevenmnuchin1 by someone other than the Secretary or an individual with authorized access to his account. As such, the retweet is being deleted,” he wrote on Wednesday.

A retweet was posted last night on @stevenmnuchin1 by someone other than the Secretary or an individual with authorized access to his account. As such, the retweet is being deleted.

Bloomberg News reports that the account for Mnuchin, @stevenmnuchin1, no longer had a tweet retweeted from @The_Trump_Train that was critical of General Motors.

The tweet that was retweeted by the Treasury secretary’s account suggested that GM should “pay back” the bailout it received amid its 2009 bankruptcy, a suggestion floated by President Donald Trump on Twitter on Wednesday, when he retweeted the same tweet.

“If GM doesn’t want to keep their jobs in the United States, they should pay back the $11.2 billion bailout that was funded by the American taxpayer,” the @The_Trump_Train tweet reads.

The @The_Trump_Train account was at the center of a number of retweets from Trump early Wednesday, including a meme that showed many of his political rivals (and acting deputy attorney general) in jail for “treason.”

A Treasury spokesperson told the Wall Street Journal that it wasn’t clear if Mnuchin’s account was hacked or who was responsible for the retweet.

GM recently announced a round of layoffs, and the closure of five plants, enraging the president.

You can read all of the Bloomberg News report here.