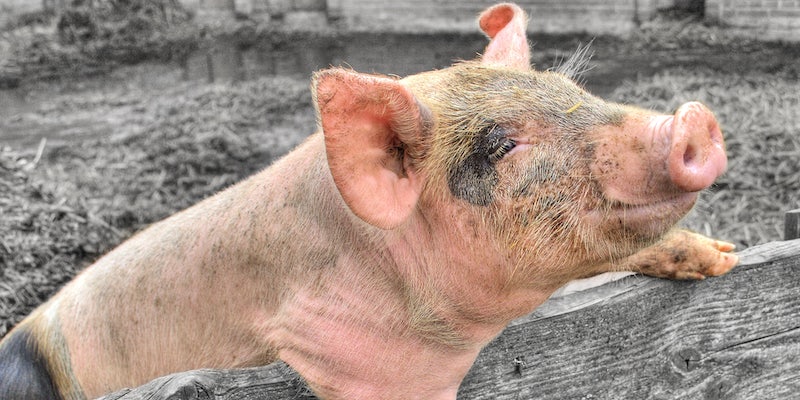 A disturbing video of animal abuse was released from an Oklahoma farm.

Tyson, the nation’s largest meat producer, has come under scrutiny after a disturbing video of animal abuse was released from an Oklahoma farm.

The footage was surreptitiously captured by the Mercy for Animals group at West Coast Farms, under contract with Tyson, from mid-September to mid-October. An activist posed as a farmhand to document staffers kicking pigs, throwing piglets, and shaking pigs by their heads.

Warning: This is graphic.

The activist who shot the video reported abuses to the farm owner on three different occasions but was essentially brushed off. Since the video was released, farm owner Lonnie Herring has fired all the employees in the video. Tyson has also terminated its contract with West Coast Farms.

“We’re extremely disappointed by the mistreatment shown in the video and will not tolerate this kind of animal mishandling,” said Gary Mickelson, a spokesman for Tyson Foods. “We are immediately terminating our contract with this farmer and will take possession of the animals remaining on the farm.”

Since 2004, the People for the Ethical Treatment of Animals (PETA) has released footage depicting the abuse of chickens.

“The investigator also documented sickening cruelty to animals in both the Georgia and Tennessee slaughterhouses,” PETA reported in 2008. “Supervisors at both facilities either were directly involved in the abuse or were made aware of it by the investigator—but they did not stop it.”

The following video features a confession from a longtime employee of Tyson poultry slaughterhouse in Arkansas who quit after PETA uncovered the abuses.

And yet while the video from West Coast Farms may seem shocking, such activities rarely violate industry standards set by the American Veterinary Medical Association, NBC reported. One Reddit user who used to work on a hog farm provided details regarding the piglets.

“Piglets are killed by having their heads smashed against the concrete because it’s quick and if done properly (which those guys aren’t doing) the piglets are dead before they even know what happened,” legless_kraig commented. “By far my least favorite part of the job. … Usually it’s done if they are sick or infirm but the ones in the video seemed fine to me so not sure what’s the deal there.”

Between 1975 and 2013, pork consumption in the U.S. has hovered between 5.4 and 8.6 million metric tons a year, Farmdocdaily reported. What has steadily increased is the demand for pork in China, which is on track to consume more than 54 million tons this year. Since 2009, the U.S. has increased its pork exports year after year. The total number was 2.2 million metric tons in 2012, with 431,000 metric tons going to China alone, according to the U.S. Meat Export Federation.