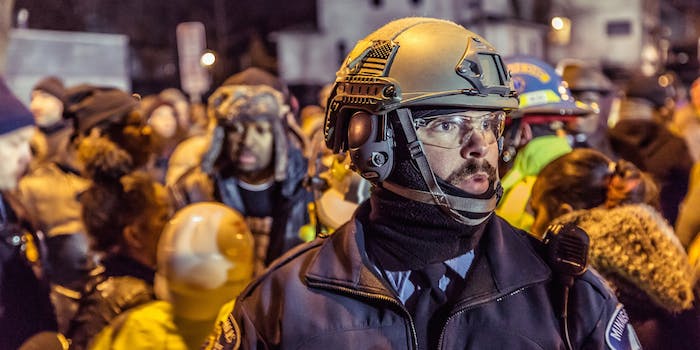 One of 4 suspects released in Minneapolis Black Lives Matter shooting

Police arrested two men but they've yet to be identified.

Minneapolis police released one of four suspects in custody in connection with a shooting Monday night near a Black Lives Matter protest that wounded five people.

Police said they had arrested a 23-year-old white man in Bloomington, Minnesota, at 11:20am CT. A 32-year-old Hispanic man from South Minneapolis was also detained by police but released on Tuesday afternoon.

“Eventually, they sent out police to talk to him and escort him away from the march.”

Shortly before 6pm CT, the Minneapolis police department announced via Twitter that two additional suspects, white men ages 23 and 26, had turned themselves in to the authorities. Police have not released the names of any of the suspects.

Police stated earlier on Tuesday that they were seeking “three white males” linked to the shooting. A police spokesman told the Daily Dot that the names of those arrested would be released “at the time of charging.” Asked if the remaining suspect would be arraigned tonight, the spokesperson said: “That is not how it works in Minnesota.”

Ryan Kennedy, executive director of the Minnesota Public Interest Research Group, told the Daily Dot that police had release the 32-year-old suspect. “They confiscated one gun in his possession. Eventually, they sent out police to talk to him and escort him away from the march,” Kennedy said.

Condemning the shootings as “abhorrent” on Tuesday, Mayor Betsy Hodges said the city was “sparing no efforts to bring any and all those responsible to justice.”

Five people suffered non-life-threatening gunshot injuries at roughly 10:45pm CT on Monday night, a block from a Minneapolis police department where activists and community members have been gathered for more than a week following the fatal shooting of 24-year-old resident Jamar Clark by a police officer.

#4thPrecinctShutDown Anti-Black racism is bigger than Minneapolis. This is a global epidemic. #BlackLivesMatter pic.twitter.com/QNF4u79Ada

The Minneapolis branch of Black Lives Matter told its followers on Facebook that the shooting near the city’s Fourth Precinct had been committed by “white supremacists,” adding: “We won’t be intimidated.”

The group also shared a video allegedly shot four days before of two white men driving to the protest site. One of the men, seen wearing a mask, is apparently holding a pistol in the video. “We’re going to see what these fucking dindus are up to,” he says, using a pejorative term for African-Americans. “And yes, we are locked and loaded.” The two also apparently made reference to 4chan’s “politically incorrect” message board /pol/.

Witnesses interviewed by journalists at the scene say the three men have been identified as white supremacists and during a heated exchange they were asked to leave the demonstration. The men reportedly walked about a block north of the police station, where they followed by a few of the protesters. At least two allegedly drew their weapons and opened fire.

On Tuesday, the Minneapolis NAACP accused police officers of being involved in the shooting during an interview with CNN. “We know from blackboards and chat rooms and also videos that we have posted on our website that police that are from different counties, police from different districts, have come down to entice the protesters, have come down to bully the protesters,” said Raeisha Williams, a spokesperson for the group.

Protesters demanding justice in the Clark case have asked authorities to release a series of videos from the night of the shooting—police officials say doing so would hamper the investigation and taint witness testimony.

A fraction of the ppl matching for justice. Couldn't get the 3,000+ ppl who are here. #4thPrecinctShutDown pic.twitter.com/W2RTevvXPv

The demonstrators planned a student walkout and a march for the day after the shooting. The participants were encouraged to wear black. Several hundred gathered at the Fourth Precinct before marching to City Hall where officials had reportedly placed the building on lockdown.

“We won’t be intimidated.”

Authorities say Clark was interfering with the attempts of paramedics to help an assault victim; they’ve also said he was a suspect in the assault. An altercation ensued and an officer fired his weapon, hitting Clark. He died in the hospital a day later. In a statement to reporters last week, police union president Robert Kroll claimed that Clark had gained “physical control” over an officer’s gun belt and pistol.

But witnesses have come forward with a different version of events. Two men leaving an Elks Lodge across the street told CNN on Sunday that Clark was restrained and in handcuffs at the moment he was shot. One Minneapolis resident, who said he walked outside immediately after the gunshot, said he saw the officers remove Clark’s handcuffs before a second team of paramedics arrived.