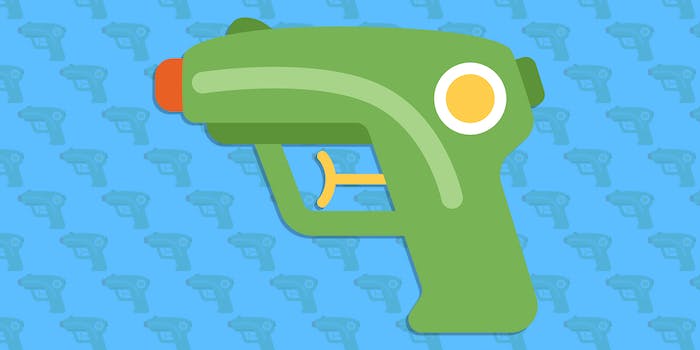 A powerful visual tool of harassers just got stripped away.

Following in the steps of Apple, WhatsApp, and Samsung, Twitter has updated one of its controversial emoji offerings. Users will no longer be able to use the gun emoji. Instead, they’ll have to visualize their rage (or frustration) with a water gun emoji.

The update could be one more way the harassment-plagued platform can help battle trolls and hate. The old pistol icon was one means online abusers formerly used to harass others.

When Apple became the first to transform the pistol emoji into a water gun emoji in 2016, it was seen as a political statement (one that some users weren’t entirely pleased about). Given the current political climate, the move seems to be more than just an arbitrary emoji design decision.

For the survivors of the Parkland high school shooting, for example, Twitter has been a powerful means to share their message of gun control and change. It’s also been the place they’ve seen the most harassment and vitriol. As conspiracy theories spread in the wake of the shooting, Twitter announced it would be implementing anti-spam and anti-abuse tools to protect the survivors from backlash.

Replacing the harsh visual representation of the pistol emoji with the more playful water gun emoji makes one less way Parkland survivors, and other abused Twitter users across the board, can be abused by harassers.

Twitter has made other efforts to reign in the negative aspects of its social media platform. Last month, Twitter CEO Jack Dorsey put out a call for experts to help the social media giant evaluate its health.

“Twitter’s health will be built and measured by how we help encourage more healthy debate, conversations, and critical thinking; conversely, abuse, spam, and manipulation will detract from it,” the company wrote in an accompanying blog post.

Eliminating the pistol emoji may be one seemingly small way to keep Twitter conversations “healthy.”