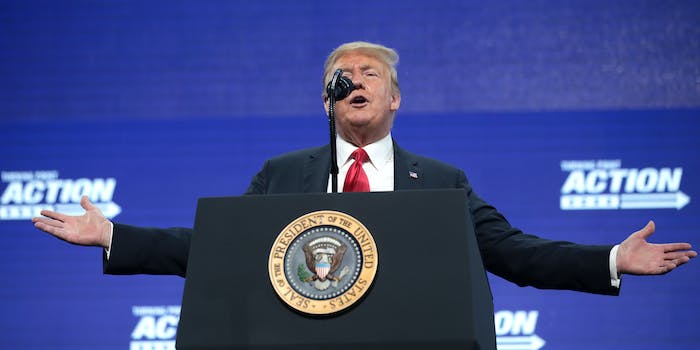 Twitter is trying to stop misinformation in the aftermath of the election.

Twitter on Thursday announced a new set of election-related rules and policies, including one that would flag a hypothetical tweet from President Donald Trump if he prematurely declared victory in the upcoming election.

In a blog post on Thursday, Twitter said it was expanding its civic integrity policy. The new rules would allow the platform to flag or remove tweets that contain false or misleading information about “laws and regulations of a civic process;” have “disputed claims” about election rigging, ballot tampering, vote tallying, or certification of election results; or have misleading claims about the results of an election.

Examples given by Twitter included “claiming victory before election results have been certified” or “inciting unlawful conduct to prevent a peaceful transfer of power or orderly succession.”

While Twitter did not clarify how exactly it would determine or go about enforcing the rules, it did say that it will “label or remove” tweets that break the new rules.

Trump has repeatedly claimed without evidence that the upcoming presidential election will be “rigged” against him because of the prevalence of mail-in ballots.

“The goal is to further protect against content that could suppress the vote and help stop the spread of harmful misinformation that could compromise the integrity of an election or other civic process,” the company wrote in the blog post.

Twitter has flagged Trump’s tweets numerous times, perhaps most prominently when it placed fact-checking labels on some of tweets about mail-in ballots.

Twitter’s new rules will go into effect next week.