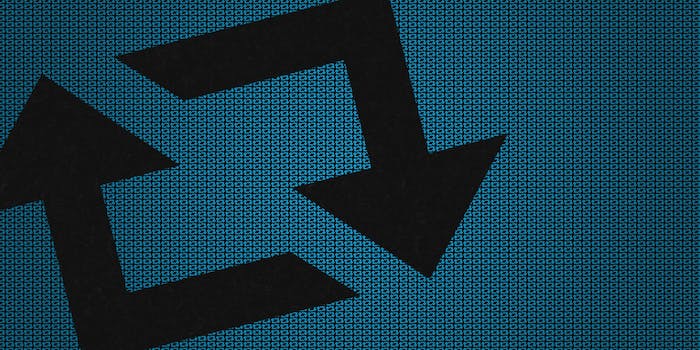 Someone at Twitter headquarters appears to be having a serious identity crisis. Just yesterday, the company introduced a major change to its photo-sharing feature, a distinctly Facebookesque upgrade that allows users to “tag” up to 10 of their friends in photos and upload more than one photo per tweet.

Then, later in the day, user reports broke about an even more severe test-swerve into Facebook territory: A subset of users saw the retweet prompt in their iOS app swapped out for a “share” button.

Now, if the users were to press the “share” button, it would still retweet the content, so Twitter hasn’t curbed retweeting. But this test indicates that it is considering changing the terminology to “share”—which is what Facebook uses. It’s also just much more generic than “retweet.”

During its IPO, Twitter appeared to have learned from the mistakes Facebook made, and for a while, it looked like the blue bird would stand as an example of how to go public for tech companies. But Facebook’s bold investment strategy and aggressive monetization techniques for mobile have bolstered the larger social network, while Twitter continues to struggle with how to make its service more welcoming to newcomers. Unlike Facebook, which is pretty self-explanatory, the world of Twitter is harder to enter; RTs and @-replies seem like second nature to those of us who are familiar with the app, but people who are just signing up can find the interface confusing.

Twitter has not responded for comment about this latest experiment, but it’s disconcerting that the company is messing with one of its signature features like this, and implies a lack of confidence in the uniqueness of its platform. Will Twitter sacrifice the things that make it unique in order to keep user growth up?

H/T The Next Web | Image by Fernando Alfonso III