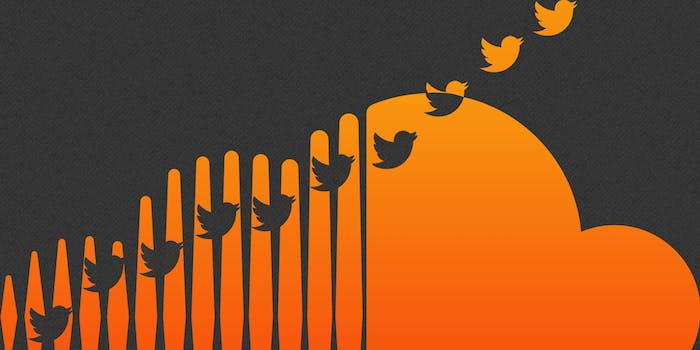 Will Twitter buy Soundcloud to properly launch its music career?

Re/code reports that Twitter is considering a deal to buy Soundcloud, the Berlin-based music-sharing service. Neither company has confirmed this rumor, which Re/code sourced from people close to both companies. So there are a lot of blanks to fill in here, and nothing is certain.

CEO Dick Costolo said Twitter is “doubling down” in 2014 to grow its userbase, and it looks like that might include a second major attempt at making a go of it as a music service. So far, its acquisition of (awesome) music discovery tool We Are Hunted  and its native music app failed to generate much interest in using Twitter as a music discovery or playing tool. But Soundcloud, with its 250 million users, is already a viable social network in its own right. As long as users don’t revolt at a Big Twitter taking over, Soundcloud could be Twitter’s way into music.

A deal between the two companies would be certainly fuel Twitter’s ambition to keep pursuing a corner of the music market. The way most people already use Twitter to share music is by posting Soundcloud links, so deeper integration would provide a way for Twitter to more organically tap into music.

Also, as Re/code’s Peter Kafka points out, a deal would give Soundcloud access to an attractive potential revenue stream through Twitter’s considerable advertising resources. Twitter might have to iron out some deals to ameliorate record labels, since Soundcloud’s licensing status is even more precarious than Rap Genius’s used to be. (It uses a Digital Millenium Copyright Act loophole where it gets license immunity since third parties upload the content.) Soundcloud has already reportedly started talks with labels to close the loophole, though, so perhaps this is something already getting worked out between Soundcloud and Twitter.

Clearly, Twitter is pursuing a YOLO growth strategy —it’s trying just about anything to see what sticks, from Facebook-ified profile makeovers to strange Amazon ecommerce tie-ins. They’re launching new features and experimenting with the abandon of an oily teenager dabbling in molly and sloppy makeouts. That’s not a bad thing, though the lack of a unified direction may make investors wary. Twitter is, at least, being interesting as it grasps for more users. And even though buying Soundcloud doesn’t fit neatly into a unified long-term growth plan, it’s the best (potential) plan for making Twitter’s music ambitions play out yet.

Update: Tech.eu is reporting that German news site SPIEGEL Online has claimed that Twitter was interested in purchasing SoundCloud, but has decided against an acquisition.