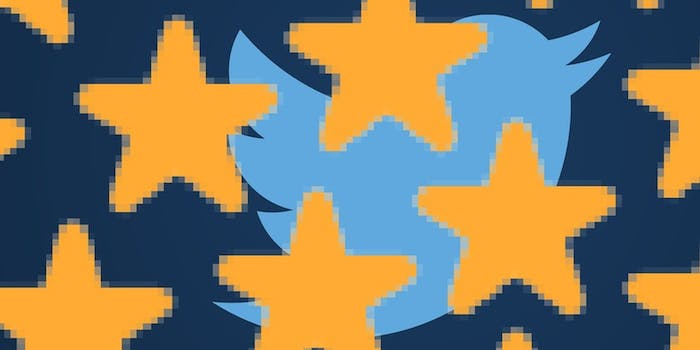 Twitter is turning favorites into retweets, and nobody’s happy

While Facebook curates content through complex algorithms intended to reflect its users’ interests and preferences, Twitter is often described as a “firehose.” Its users are blasted with an unadulterated stream of content from those they follow, with no filtering or personalization. It’s both the site’s great strength and weakness: Users get unrestricted access to the content they want to see, but newcomers can be overwhelmed.

There’s been rumors for a while of imminent changes to Twitter’s newsfeed to make it more similar to Facebook’s, with Twitter CEO Dick Costolo saying in May that the social networking company is looking into ways to highlight the “best” content for its users. We’re now seeing the first signs of what this may look like, as favorites made by users are finding their way into the feeds of some of their followers.

Retweets have become a fundamental part of the social networking platform, allowing users to share content from others with their own followers. Twitter’s latest experiment treats favorites in a similar way, making them public in a way they have never been before.

The only problem is that it doesn’t reflect how favorites actually work. While retweets are used to register an endorsement, or just to bring something to wider attention (to “share” it), favorites are a very different beast. More often than not they’re used as a kind of bookmarking system, saving a tweet for later use—not so they can then be shared with their followers.

The response from the Twittersphere has been immediate and unkind (to put it mildly), with numerous users angrily blasting the apparent irrelevance of seeing the favorites of those that they follow.

Oh jeeze, if Twitter is now retweeting favs into my followers’ timeline I’m going to stop fav’ing. How about that? http://t.co/dbU0LBgDlG

Ummmm why does twitter think I want to see people’s favorites on my timeline??? They need to stop adding this dumb crap to the app

why are peoples favorites showing up on my timeline stop ✖️

“There is nothing more obnoxious and disruptive than having a tweet from someone I specifically don’t follow shoved into my stream,” said the Daily Mail’s head of social media Taylor Lorenz. “I put a lot of thought and effort into maintaining a tightly curated Twitter feed. I mute people, I block (some) users, and the prospect of having errant fav’d tweets from people I don’t follow forced in front of my face sounds horrendous.”

The experiment doesn’t show up on all user’s timelines: It’s likely Twitter has rolled it out on a fraction of the user base and is now monitoring responses and engagement with the new feature. Even if it’s not made permanent—and the strong backlash suggests it won’t—it’s reflective of the company’s culture of experimentation. “It’s rare for a day to go by when we’re not releasing at least one experiment,” Twitter’s Vice President of Engineering Alex Roetter wrote on the company blog in 2013.

Beyond this one change, Twitter’s broader overtures towards curated content has been fiercely criticized in some quarters. Writing for Pando Daily, David Holmes has said that “Twitter’s days as an indispensable utility for serious news consumers may be numbered” if Facebook-style changes are introduced, and suggests that “you may not hear about another Ferguson” as a result.

H/T The Next Web | Art by Rob Price