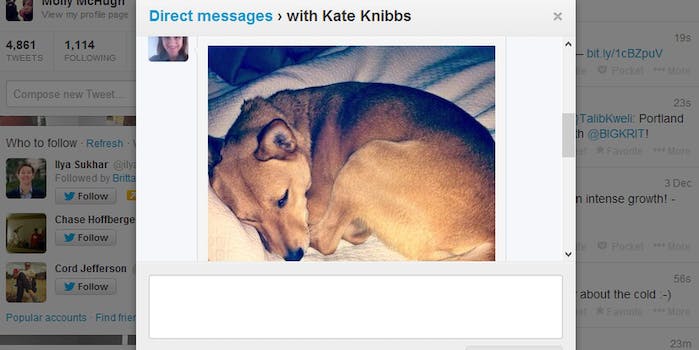 Is Twitter cool enough to enter the private messaging wars?

Twitter just entered the private messaging wars. Can it compete?

Twitter gets a lot of things right. Everyone’s favorite microblogging platform kills it when it comes to facilitating real-time public conversations and spreading information. One indication of Twitter’s success is that Facebook continues to desperately imitate its strong points.

But Twitter isn’t without weak spots, and private messaging has long been a problem for the company. Direct messages, or DMs, are often buggy and counterintuitive, and Twitter has treated its only way to privately communicate like the basement baby of the platform’s features.

On the Web, to access your direct messages, you have to hit a little mail symbol in the top right corner; it isn’t treated like one of the primary features. On the updated mobile app, however, a shortcut to messages appears at the bottom of the screen right alongside Timelines and Notifications. Twitter is clearly serious about folding DMs into the average user experience.

Now that the network is finally paying attention to its oft-neglected private messaging service and making it easier to find them isn’t the only change. Twitter now allows users to send photos in private messages through its mobile app. This upgrade allows users who follow each other to edit and swap images as well as text, which should sound familiar. But is this enough to compete with rival social media and messaging apps? Here’s how Twitter’s newly polished DM feature compares its new rivals.

Facebook has several advantages over Twitter, re: private messages. For starters, on both Facebook Messenger and within the mobile Facebook app, you’re not limited by characters. The 140-character cap is an essential part of Twitter, but it’s more annoying than inspiring in private conversations. Facebook Messenger isolates Facebook Chat into an easy-to-navigate app, and it lets you message contacts outside of Facebook. Plus, Facebook lets you send all sorts of media and attachments on the Web, while Twitter’s souped-up DM experience is only for mobile. Oh, and you can send voice messages with Facebook Messenger. It’s the whole package. OK, it’s almost the whole package.

Twitter’s editing tools are surprisingly strong. You want a nostalgic tint? Twitter offers both “1963” and “1972” as filter options. But overall, Facebook’s head start in recognizing the importance of private messaging gives it a distinct advantage over Twitter.

Snapchat’s entire thing is casual, private image-based messages. That’s the whole reason people use it. So, of course, Snapchat has this particular chatty style of photo-messaging on lockdown. You want to draw a weird mustache on your face before sending it to someone? You can scribble in a variety of colors. Want to add a pithy caption? Sure thing. Video more your style? Go ahead. Want your photo to disappear into the digital ether? Well, you don’t really have a choice what the recipient does (or the government), but it could happen.

Of course, Snapchat’s appeal is the way it facilitates image-based messaging. It doesn’t allow you to pull an image from your phone, so it only works for of-the-moment photos—you can’t Snapchat a picture from earlier that week. So while Snapchat certainly won’t lose any users to Twitter, they’re not really in direct competition in the same way Twitter and Facebook are (or Instagram and Twitter could be).

Twitter’s DM overhaul comes just before an anticipated Instagram event (which just so happens to be today), and it’s rumored that Instagram may be unveiling its own private messaging function. If Instagram does this, Twitter will have another serious rival. Instagram will have Facebook’s messaging expertise to draw upon (and possibly will just be a layer to the chat client and integrate it into its own). And if Twitter is hoping the addition of photos will spark an interest in DMs, the introduction of private messages to an app already more optimized for photo-sharing could throw a Toaster-filtered wrench in Twitter’s plans.

Twitter is a publicly traded company compelled to monetize as much as possible, and it’s no wonder there’s a push toward private messaging considering how services like WhatsApp see billions of interactions a day. Gaining a new functionality with the potential to substantially boost user engagement would only bring good things to Twitter. But it won’t be easy in a crowded market like this.