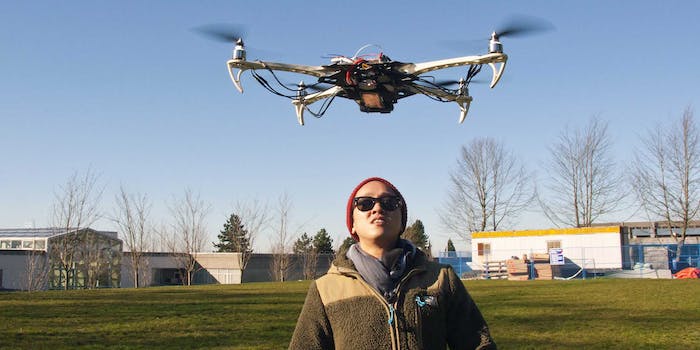 Try landing with 140 characters of runway.

Drones aren’t just taking over the skies, they’re taking over your Twitter feed as well. The social network company just patented a drone that can be piloted via tweets.

Published last Thursday, the patent for the “Messaging-Enabled Unmanned Aerial Vehicle (UAV)” was filed by the company over the summer. According to the patent, the drone can record and broadcast videos, making it a potentially perfect pairing for Periscope, the live streaming service owned by Twitter.

More interesting than the standard drone-like behavior that the UAV is capable of, though, is how users will control the device. According to Twitter’s patent, users will be able to issue “commands embedded in messages and directed towards an account associated with the UAV.” Essentially, users could tweet out flight directions to the drone.

The idea doesn’t sound particularly, uh, safe, and Twitter has remained mostly mum on the topic—as most companies do with patents. The company told CNBC, “Two words: drone selfies,” but offered no additional explanation.

Regardless if the drone makes much sense, Twitter has already seen the idea in action. Former Senior Developer Advocate at Twitter Romain Huet has been flying a tweet-controlled drone since 2013, which has tweeted images from a built-in camera through its @twicopter account.

Odds are nothing will ever truly come from Twitter’s patent. If they did attempt to implement the idea in any major way, odds are they would end up with a Twitch Plays Pokemon situation but with an actual, physical object. It would hover aimlessly as one contingent tweeted out commands to make it soar while others tried relentlessly to crash it.