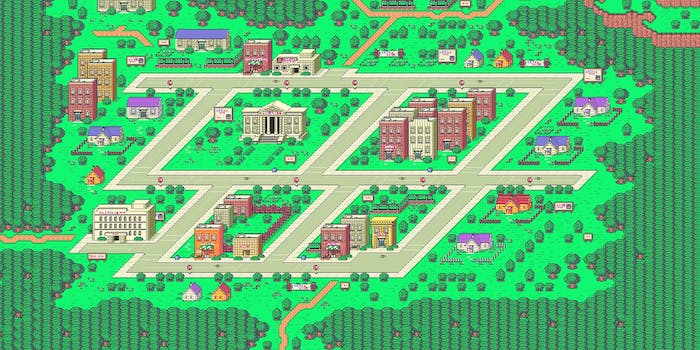 'Ness, It's Your Dad,' tugs on our weird 90s heartstrings.

At last, Weird Twitter has the meme generator it so rightly deserves.

Whether you’re nostalgic for the SNES or just another weirdo in 140 characters, the viral appeal of “Ness, It’s Your Dad” is nearly impossible to resist. I discovered this gem while browsing Twitter two nights ago, when I laughed out loud at the ridiculous text GIF—Ness’ dad describing a photographer falling out of the sky—that appeared as a retweet in my feed.

The account is meant to humorously characterize the dad in EarthBound, a Nintendo game created in the mid-90s for the SNES, but you don’t necessarily need to be a fan to appreciate the humor and simple brilliance of it. It’s rife with the universal humor of dad jokes.

In the game, Ness’ dad exists only in text. He gives Ness advice, money, and appears as a character Ness must call to save the game, but remains off screen. This characterization allowed game designer and writer Aaron Linde to create funny GIFs of one-sided conversations that Ness’ dad has with, well, himself.

“‘Ness, It’s Your Dad’ is basically the humor of EarthBound paired with the endlessly loquacious narrative stylings of, I dunno, Metal Gear Solid‘s codec conversations,” Linde said in an email, referring to the iconic action game first developed for PlayStation in 1998. “It’s a version of the game in which Dad is your constant companion, offering guidance and commentary on the proceedings.

“The original game is chock full of satire about games, Western culture, and the childhood experience, wrapped in an absolutely nutshit world of irresponsible, asshole adults,” Linde said. “To me, it’s one of the most interesting IPs ever developed. I don’t think I’d say I decided to satirize EarthBound—really all I want to do is experiment with its voices and universe.”

Eager’s tool lends itself remarkably well to comedy, though it’s not the only thing people are making with it. On the EarthBound text Tumblr, people have submitted everything from song lyrics, to philosophical statements, to art memorializing Satoru Iwata, former CEO of Nintendo, who passed away earlier this year.

Eager built the tool using GIF.js, a JavaScript GIF encoder that runs on browsers. People can control the text speed, text box flavors, and insert control codes to change lines, and add additional delays or pauses. The source code—created in 2014—is available on Github, and anyone can contribute to it.

“The first thing I tried to do was replicate an in-game string, so I tried the text that fires when Ness’ dad first calls to save the game (‘Hello, it’s your dad. [pause] [line break] ‘Work to exhaustion when you’re young…’),” Linde said. “Then I screwed around with it and wrote stuff that I thought would be funny, and that’s pretty much how it started.”

Considering Linde created “Ness, It’s Your Dad,” just four days ago, its popularity on Twitter is pretty impressive. (The photographer joke is the most popular, and racked up almost 800 retweets.) Fans are drawn to the human characteristics that embody the GIFs simulating an off-screen character from a cult-classic Nintendo game, but others, like me, find the format, combined with the quirky dialogue, to be hilarious, despite never having played EarthBound.

GIF humor is perfect for Twitter, especially after the company allowed GIFs to autoplay in the timeline. By using Eager’s tool, Linde writes tweets that go beyond the character limit, and create new comedic stylings that include the pauses and line-breaks not afforded to writers who stick with texts or photos.

“Best of all it allows long-winded blowhards like me to break free of the 140-character limitation, but still have access to text as a primary media,” Linde explained. “If the tool didn’t exist, the idea never would’ve occurred to me.”

Linde is already experimenting with one of the hallmarks of Weird Twitter comedy—text based, esoteric humor that often confuses people who might see it retweeted into their timeline without context. Take, for instance, the goodbye manifesto that made the rounds among anonymous or satirical Twitter accounts earlier this month.

im done with twitter. you might hate me but please read this first, its something ive been meaning to say for a while pic.twitter.com/TBrxrfVKwM

But what makes “Ness, It’s Your Dad,” different from some of the Twitter accounts we’ve come to admire for their quirky, indescribable senses of humor, is that Linde makes the account much more accessible by using a format that’s having its moment in the Internet sunshine.

It’s easy to see why dad jokes resonated—not only is the character a dad himself, but the G-rated jokes paired with 90s nostalgia make it seem much more relatable. We might not know Ness’ dad, but we probably know a dad. And he sounds an awful lot like this one, if he gave us $1,000 to spend on hamburgers.

As Linde explained, the dad joke format was just an easy one to fall into, and the game is adaptable to satirization and comedy. In fact, it was EarthBound that got Linde into writing—he’s now a writer at Gearbox Software where he’s working on Battleborn, a game for PC, PS4 and Xbox One dropping in February of next year.

“First couple of stabs I took at it, Dad was a lot more judgmental, and the commentary was focused more towards the weirder things that the player does in a once-through of EarthBound, like eating out of garbage cans and beating up skateboarders,” he said. “But … I brought him back more towards his in-game persona, which again, is a wonderful character. Supportive, affable, funny. Dad jokes seemed appropriate.”

As Jaya Saxena wrote in the Daily Dot, dad humor is popular because it’s just so simple for everyone to enjoy.

Dad humor has no edge, no agenda other than laughter and groans. It comes from a place of purity and maybe slight ignorance. Often there are puns involved. Dads send you emails about dessert in the middle of the night, or build elaborate traps to keep squirrels from eating the bird feed, or argue with smoke detectors. It’s inspired in its hilarity, but—this is where Weird Twitter falls short—real dad humor is also completely natural. Your dad would make the “four eels” joke if he knew of Outkast, and he wouldn’t need to performatively post it online either.

Linde’s conversations as Dad are already compelling, but he says he wants to experiment with replying to other users. Because the GIF-maker is so easy to use, he’ll be able to customize Dad responses to any followers who want to interact as Ness.

So far, he’s written a post each day, and fans love it. He said that while he gets busy with other projects, that count might drop down to a few posts a week. But if you want to fill the void with your own commentary inspired by Nintendo games from the 90s, you can try Eager’s tool for yourself.