Last summer, Olga wanted to learn to code. A San Francisco transplant who brought her family from Kazakhstan, she struggled to find a job in the city. With limited resources, she turned to Twitter’s NeighborNest, a community center that provides assistance and support to underserved members of the community which celebrated its one-year anniversary this week in San Francisco.

Olga taught herself Python with the help of Twitter volunteers in an open lab while her two children were in childcare, and became certified through a University of Michigan class on Coursera. When she showed up at NeighborNest to share her certificate, she brought cherry pie.

Olga then pursued a nanodegree in front end web development at Udacity through a scholarship from a San Francisco nonprofit. Now, she’s hoping to turn her learnings into a career.

“I am applying for the Facebook scholarship for the 19-week course at Dev Bootcamp for women,” Olga said. “If I do not succeed I am going to apply for internship in web development. I keep on working at school where my daughter Amina studies.”

Situated just a few blocks from Twitter’s San Francisco headquarters, the 4,000 square foot NeighborNest facility is home to technical and community programs. The program hosts trainings to help people learn how to use computers and online services, provides childcare, and even teaches kids how to code. Twitter partners with a group of Bay Area nonprofit organizations to fund the endeavor.

In its first year, NeighborNest hosted over 3,500 visits from local residents, more than 920 hours of programming, and over 800 hours of childcare. 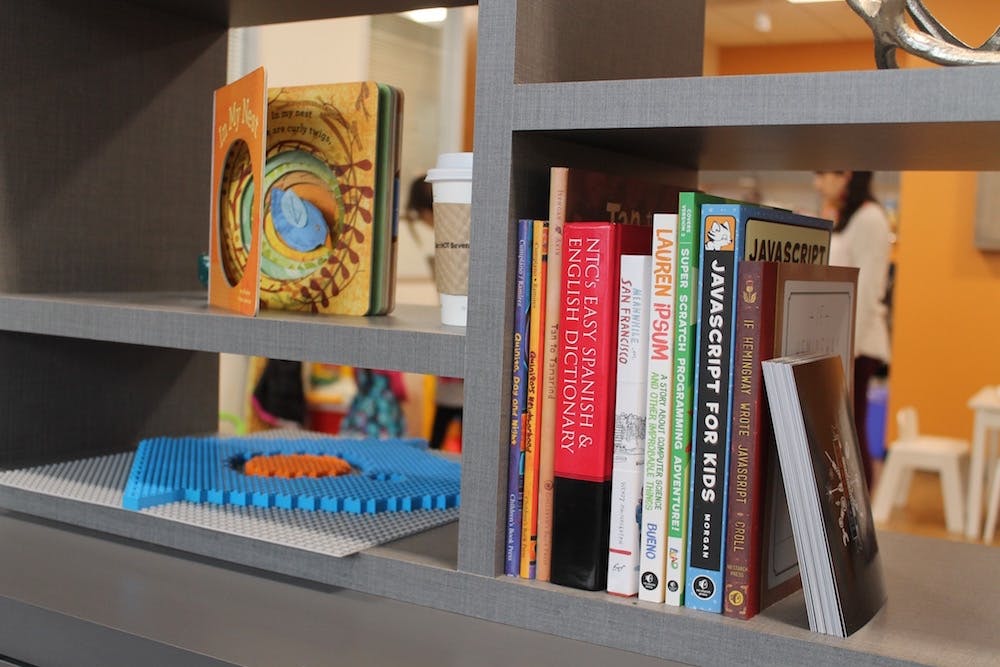 The programs serve low-income families in the surrounding area, which is statistically the poorest in San Francisco. In the Tenderloin, 34.6 percent of the population lives below the poverty level, and although NeighborNest is just a short walk away from Twitter, you can easily spot signs of struggle in the area. Used needles on the sidewalk and homeless individuals sleeping on the street are not uncommon.

Twitter’s anchor partner at NeighborNest is Compass Family Services, a nonprofit working with homeless and at-risk families to gain affordable housing and sustainable living. Other partners include Catholic Charities and United Playaz.

United Playaz was one of NeighborNest’s first nonprofit partners; the organization approached Twitter to see if it was possible to host classes on how youth can use social media safely and responsibly. The program now has a full curriculum geared toward social media safety that students helped develop.

OneDegree, a nonprofit organization that helps individuals search and apply for housing and community resources, hosts classes once to twice a month at the NeighborNest computer lab. Natalia Carrasco, head of community at OneDegree, says NeighborNest is something like a business center for clients of Compass, which is located just a short walk away from the facility.

Vivian Ramirez, a Compass client and mother of two young boys, briefly thanked Twitter and its partners for providing the space on Tuesday. Ramirez lived at Compass for six months before securing housing for her family; she is still a Compass client.

“Thanks to the Nest, because ever since they opened their doors they have helped us by providing computers to fill out housing applications,” Ramirez said through a Spanish interpreter.

The building is bright and colorful; a room for childcare, overflowing with books and materials donated by Twitter employees, sits between a large computer lab that doubles as a movie theater on family nights, and a fully-stocked kitchen. Art pieces created by clients adorn the walls, and a large mural from the Bay Area-based Mural Music & Arts Project portrays a blue Phoenix rising from the ashes. Next to it, photographs of supporters, clients, Twitter volunteers, and students covers a wall.

“Students have access to a ton of resources that wouldn’t be possible.”

On Tuesday, Twitter launched a program to help less tech-savvy residents embrace common digital tools that will help them apply for housing programs, job search, chat with family on social media, and use the internet to find helpful resources.

The new digital literacy program is a four-workshop course that teaches the fundamentals of internet and computer skills—everything from how to use a mouse and keyboard to filing online forms. 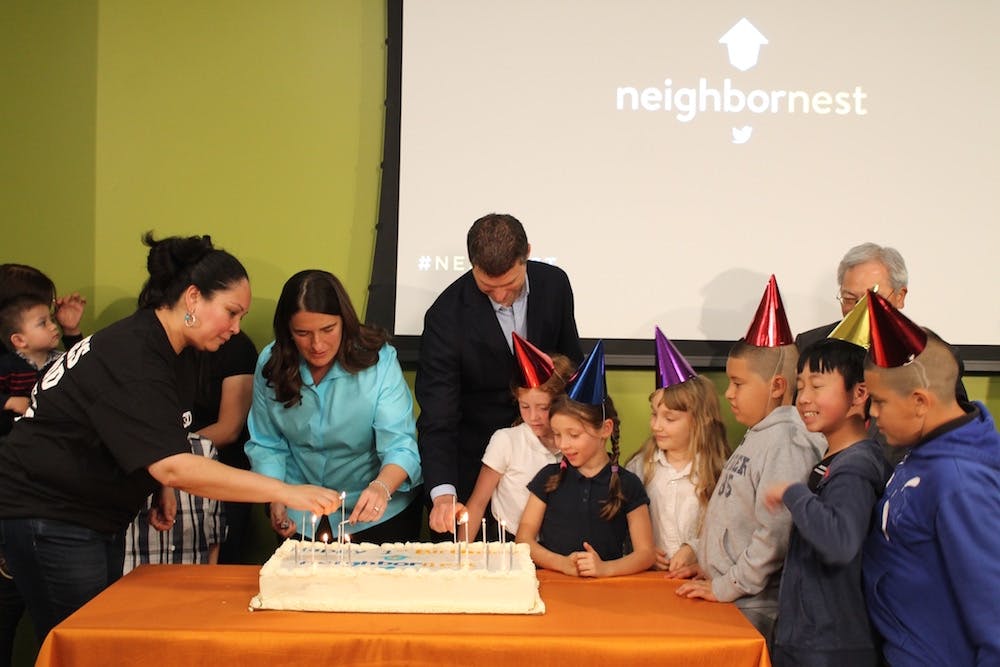 “It’s equipping families to go from zero to a level of comfort and awareness,” Leah Laxamana, community outreach at NeighborNest, said in an interview. “And the next step is to follow up with clients and say, ‘From what you’ve learned, what do you want to focus on?’ and work with them one on one and focus on the path they want to develop.”

As adults learn computer literacy, children of all ages are learning how to code. A Catholic Charities school, situated right behind NeighborNest, sends a rotating group of 46 kids to the coding program after school on Fridays to learn computer science concepts not taught in the classroom. Twitter also donated over 30 computers and tablets to the school.

Erica Nave, head teacher at Catholic Charities Maureen & Craig Sullivan Youth Services, says many of her students come from low-income and homeless families. NeighborNest not only provides an hour and a half of extracurricular programming for kids who wouldn’t otherwise have the opportunities at home or in classrooms, but also a safe place for kids to stay after school. Kids get to work with Twitter volunteers building things with Minecraft and Raspberry Pi, and often ask questions about what it’s like to make a career out of coding.

“We’re in a Mercy Housing building, where the families are primarily homeless, and we cater to a lot of those children. There is often a language barrier. Half of or none of them actually own tablets or computers in the house, so we are the only outlet or resource that can give them that technology,” Nave said. Because of Twitter, “students have access to a ton of resources that wouldn’t be possible.”

The kids are now so familiar with Twitter volunteers that they recognize each other on the street, and look forward to their Twitter visits.

Andres Ornelas, Android engineer at Twitter, regularly volunteers afternoons at NeighborNest. Initially inspired to work with children to learn ways of getting his own children excited about computer science, he said he has learned much more than he anticipated from the students, and is building out lesson plans gleaned from popular sites like Code.org and Scratch.

“I’ve always seen programming as a form of expression, like writing or painting, and I want to have the tools to introduce my daughters to it. When I found out about the Nest and they needed people for Coding with Kids, I thought it was perfect,” Ornelas said. “I realized it’s about trying things and seeing what works. What works with one kid doesn’t work with another. It’s incredibly rewarding. You come with the idea that you want to help out, but you get so much more out of it.”

He said that children are intrigued by what he perceives as some of the most mundane aspects of the exercises, like making an animal jump on screen or debating the color of the background that will take up the screen for only one class. But it’s important to leave time in each class for kids to explore concepts on their own, and experiment with those concepts they are most excited about.

Ornelas has helped many students learn to code, but his contributions to NeighborNest go beyond the after school program. He’s even helped one visitor in a quest to regain his eyesight.

During one of Ornelas’s first volunteering sessions, Anthony came to NeighborNest to submit forms for job applications. He told Ornelas he had a medical condition called keratoconus that made him legally blind, and hindered his job search. He could not afford the surgery to fix it. Ornelas helped him set up a crowdfunding campaign to pay for surgery, and his story went somewhat viral on Twitter. Two doctors reached out to help, and he raised over $4,000 for the surgery. Ornelas even drove him down to San Jose for a doctor’s appointment because he did not have any transportation.

“The open lab presents a great opportunity to meet people in the neighborhood and help out in serendipitous ways,” he said. 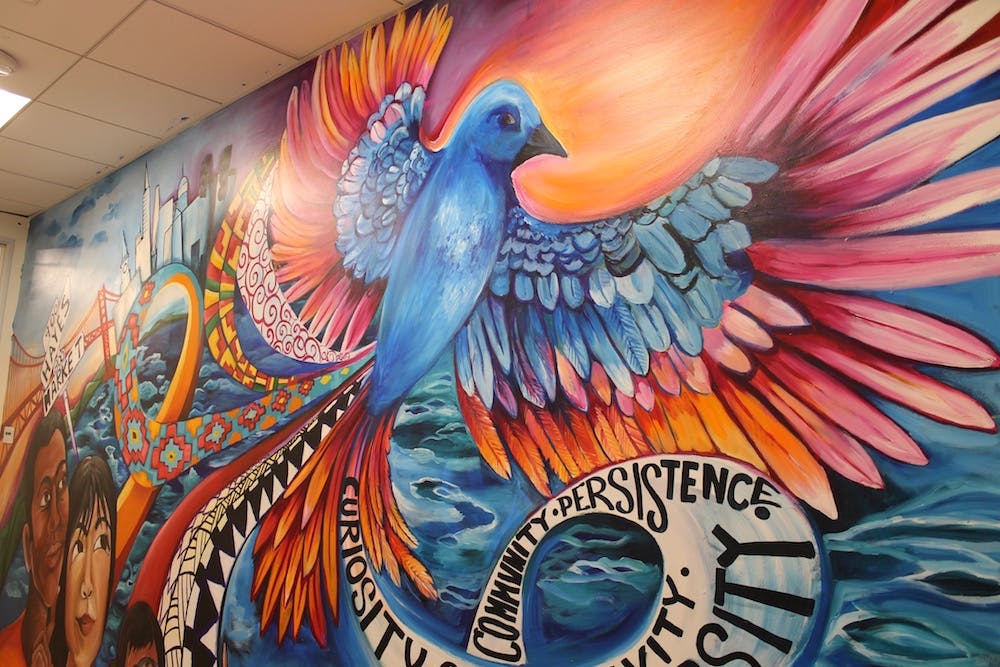 NeighborNest’s success is buoyed by support from Twitter’s nonprofit partners, and the company worked with the local community to best address issues directly in the neighborhood it calls home.

Before NeighborNest launched last year, Twitter conducted six months of research, asking families and individuals what their needs were and how best a community space could support them. The overwhelming need requested was childcare. Now, parents can plop their kids with a caretaker to read and dance and make art while they apply for housing, job search, or, as in Olga’s case, learn to code.

“It’s incredibly rewarding. You come with the idea that you want to help out, but you get so much more out of it.”

Twitter is giving back to the community, but it’s largely still seen as the poster child for the tech industry “invading” San Francisco, driving up rents and furthering income inequality. The company opened its headquarters in the Mid-Market area in June 2012, benefitted by the so-called Twitter tax break.

The controversial city tax incentive gives payroll tax breaks to companies who move to the neighborhood, but requires companies to give back financially to the surrounding community and create a Community Benefit Agreement.

About 20 companies, most of them tech firms, have taken advantage of the tax breaks that come with a move to Mid-Market, including Zendesk, Spotify, Yammer, One King’s Lane, and Zoosk. In March of last year, San Francisco Supervisor Jane Kim told the Mercury News that Twitter was slow to hold up its community service commitment, though the company disagreed.

“It took some time for Twitter,” Kim told the newspaper. “Twitter was very focused on itself and its own product. Twitter also had the unfair mantle of being the largest and most well-known of the companies, having the most to give and the largest expectations from the community.”

In a 2015 blog post, Twitter said it committed $3 million to nonprofits serving the area through 2018. Other philanthropic initiatives include Friday for Good, a biannual day of service on which Twitter employees volunteer in the community.

I spent some time at NeighborNest before Tuesday’s event turned the computer lab into a press conference and celebration room. Monday was a busy day—a dozen or so people worked in the computer lab as a handful of young children participated in song and dance time, led by a Compass facilitator. A schedule on a whiteboard alerted clients to upcoming classes, and occasionally someone would wander into the kitchen to grab a snack before getting back to work.

Four thousand square feet, the size of your average restaurant, is not a huge amount of space, but in San Francisco, where real-estate is precious and expensive, having a safe place to learn, rest, and try to stabilize oneself and one’s family can be a life-saving experience for neighbors. After its first year, Twitter’s NeighborNest is helping hundreds of underserved community members; those who can’t afford to pay the rising rents that boom along with the tech industry.