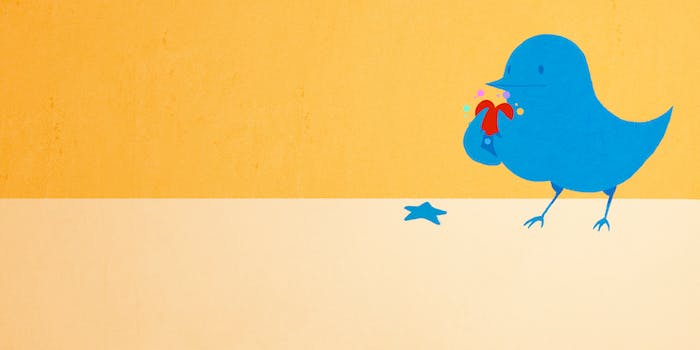 Turns out the move away from favorites wasn't a site-killer.

When Twitter decided to ditch its star-shaped favorite button for the heart-shaped like button, it caused an uproar. But new research suggests that, once the outrage died down, people opened their hearts to the heart.

Social-media analytics firm Locowise discovered a nearly 28-percent jump in the use of the feature since Twitter changed its name and appearance. The study looked at more than 1,500 Twitter accounts over a three-month period both before and after the change, for a total of more than 2.2 million tweets.

Locowise’s findings seem to indicate a continuation of the trend that Twitter saw a week after switching to hearts. The company reported a six-percent increase in likes by existing users and a nine-percent jump among new users in the initial week.

Speaking at the Open Mobile Summit, Kevin Weil, Twitter’s senior vice president of product, explained that the company made the change because hearts were “easier to understand.”

According to Sahail Ashraf of Locowise, that isn’t always the case; sometimes the heart can complicate matters. Ashraf suggested in a blog post that the heart didn’t offer the same flexibility as the star when it came to news-related tweets. “Adding a heart to a news tweet about a terrorist event?” Ashraf wrote. “That, arguably, kind of makes for a slightly more uncomfortable experience.”

Dr. Pamela B. Rutledge, director of the Media Psychology Research Center, told the Daily Dot that one explanation for the rise in engagement is that “the heart and the star have fundamentally different symbolic meanings.”

“The heart is about emotion, the star is about social value, preference or ‘importance,'” Rutledge said. “Emotions are an extension of self and, thus, carry greater importance to both the sender and the receiver.”

Twitter’s decision to embrace the heart may have led to a change in the way people interact on the platform, but it’s still not drawing new users—and that makes Twitter’s heart break.