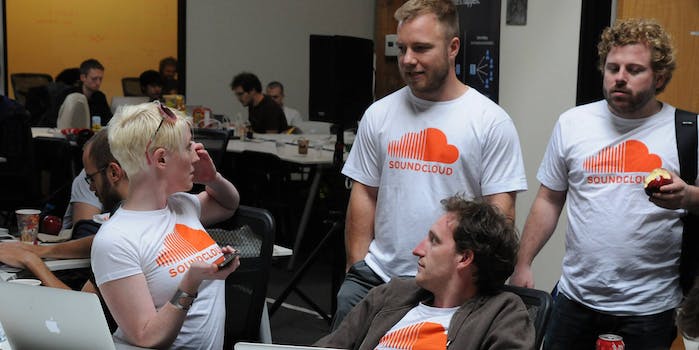 In the war of streaming music services, it’s clear what side Twitter is on. According to Recode, The social network has invested $70 million into Berlin-based streaming service SoundCloud.

The investment comes as part of a recent funding round for SoundCloud that places the value of the platform at $700 million—about the same valuation it was given back in 2014, when Twitter considered buying SoundCloud outright before walking away from the deal.

The two companies have been circling one another for some time now, so it only makes sense that Twitter would make their relationship more concrete by putting its money where its mouth is.

For a platform that is ostensively for brief text posts, Twitter has maintained a bit of an obsession with music. It briefly offered its own app for discovering and conversing about music in the form of Twitter Music. Built by the team that created music discovery service We Are Hunted—which Twitter acquired in 2012—Twitter Music lasted less than a full year.

When Twitter launched its music-centric app in 2013, it aimed to get SoundCloud on board but balked because of the streaming service’s lack of licenses.

After Twitter Music was shuttered, Twitter and SoundCloud finally found common ground and created audio cards that would allow tracks hosted on the music platform to be streamed right from the Twitter timeline—a feature only extended to Spotify links last month, but only with 30 second previews of the shared track.

The partnership between Twitter and SoundCloud is strategic for the companies, as both are currently experiencing stagnant growth and are hoping to use one another to boost user activity and interest, but it has also developed organically; Twitter users shared SoundCloud links more than any other streaming service according to a 2014 analysis by Peter Watts.

Twitter does run the risk of backing the wrong horse with SoundCloud. While the streaming service is plenty popular, boasting more than 175 million monthly listeners, it hasn’t figured out how to monetize that activity. Its first major attempt to do so, SoundCloud Go, has been roundly dismissed by critics as being poorly designed and full of noticeable absences when it comes to artists.

The social network has been through this before with Instagram. After failing to outbid Facebook for Instagram back in 2012, Twitter found itself cut out entirely by the photo sharing app, which turned off all support for embedded images on Twitter. While Twitter bets on SoundCloud, Facebook is already working closely with Spotify; the streaming service became the first to integrate into Facebook’s Messenger platform earlier this year.