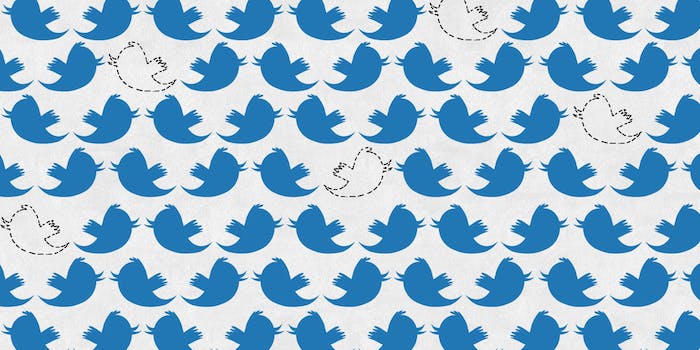 The subtle art of the fake retweet

Don’t believe everything you fav.

Twitter is a great way to spread information. Of course, it’s also a great way to spread misinformation. Twitter does not, in other words, have a fact-checker. Yeah, you can sue someone for libel based on something they say on Twitter, as Courtney Love knows well. But as Courtney Love’s enemies have discovered, it’s harder to actually win that fight.

One of the most simple and effective ways to post very-not-true things is to cloak them in the legitimizing power of the fake retweet. A fake retweet, for ye naifs who are unfamiliar with the term, is when a Twitter user pretends to retweet another Twitter user, but either changes or makes up wholesale an original tweet. Sometimes people do it to make something they want to say seem more authoritative, by throwing the reputation of someone more famous behind it.

A fake RT dispute occurred just today between writer Emily Gould and one of her Twitter fans.

@Nieman718 @dearkates heyyyy I didn’t tweet this and doing this is really uncool.

Since Emily Gould (follower count: 12,300) has more Twitter cachet than this fella (follower count: 41), he used a fake retweet to give what he wanted to say more authority (or, maybe, he just wants her to notice him).

Another prominent fake retweet victim: rapper-turned-actor Bow Wow. In Bow Wow’s case, the trick wasn’t used because he’s authoritative. It was used to mess with him. And it worked. In 2011, Bow Wow threatened to quit Twitter when another user divvied out a fake retweet pretending that Bow Wow had called himself the best rapper-turned-actor.

You serious? RT @BowWow: Haters can say what they want. I bet you can’t name another rapper-turned-actor better than me!

People started criticizing Bow Wow for bragging, listing other rappers who acted. As you might expect, Bow Wow was annoyed that he was getting so much heat for something he didn’t even say.

Most high-profile fake retweets are used as pranks against companies. For example, in 2012, people started posting tweets with fake retweets from Applebee’s about 9/11. The fake retweets made the restaurant chain look simultaneously brazen and oblivious.

just sick RT @Applebees Come down to Applebee’s from 9am to 11pm today and get an upgrade from any plane meal to an explosive fiesta dish!

gross. RT @Applebees If you’ve lost someone special, bring in their death certificate today for 10% off all apps (Until 6 PM, dine-in only)!

Applebee’s tried to clarify that the tweets were fake, but the brand damage was done.

@MegMcA No, not on our part….they created a fake RT with our name

Twitter hasn’t clarified its official stance on fake RTs, though the decision to offer an retweet button may have been partially influenced by a desire to get rid of fake retweets. Though the company may not like fake retweets, it doesn’t seem like there’s much they can do to crack down. Business Insider called them a security problem back in 2009, when TechCrunch’s Michael Arrington got the fake retweet treatment.

Fake retweets are a scourge to the people who see tweets that make them look like they said something they didn’t. And yeah, they definitely ding Twitter’s credibility since it’s so easy to fake a retweet. But they’re an example of creativity… and when they’re used to troll brands, it’s hard not to laugh.