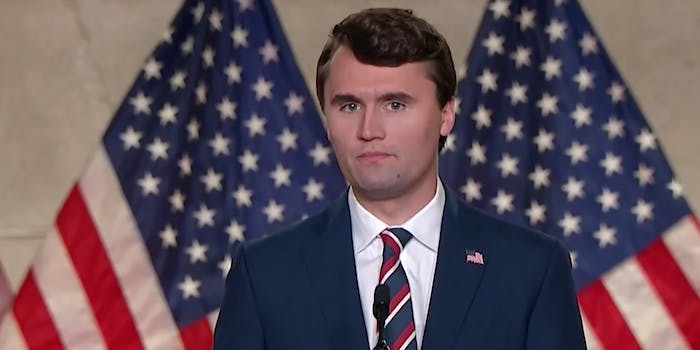 The conservative organization is accused of secretly paying teenagers to spread pro-Trump content.

A deceptive social media campaign run by an offshoot of the conservative youth organization Turning Point USA has been shut down by Facebook and Twitter.

The campaign, which paid teenagers to spread conservative talking points online, was first revealed on Tuesday by the Washington Post.

The operation was compared to that of a “troll farm” and was able to avoid detection by relying on the personal accounts of actual users instead of bots. The Post was able to find 4,500 tweets containing identical content, although it believes that number represents only a fraction of the campaign’s content.

Participants, who all appeared to be residents in the battleground state of Arizona, did not disclose that they were being paid to make the posts.

In a statement to the Post, Austin Smith, Turning Point Action’s field director, argued that the campaign was merely an online version of what the organization had planned to do on-the-ground prior to the pandemic.

“Many positions TPA had planned for in field work were going to be completely cut, but TPA managed to reimagine these roles and working with our marketing partners, transitioned some to a virtual and online activist model,” Smith said.

Smith also described the operation as “sincere political activism conducted by real people who passionately hold the beliefs they describe online” and pushed back on comparisons to “an anonymous troll farm in Russia.”

But social media companies don’t seem to agree. Twitter responded to the news by suspending at least 20 accounts for engaging in “platform manipulation and spam.”

Facebook removed numerous accounts tied to the campaign for violating its rules on inauthentic behavior as well.