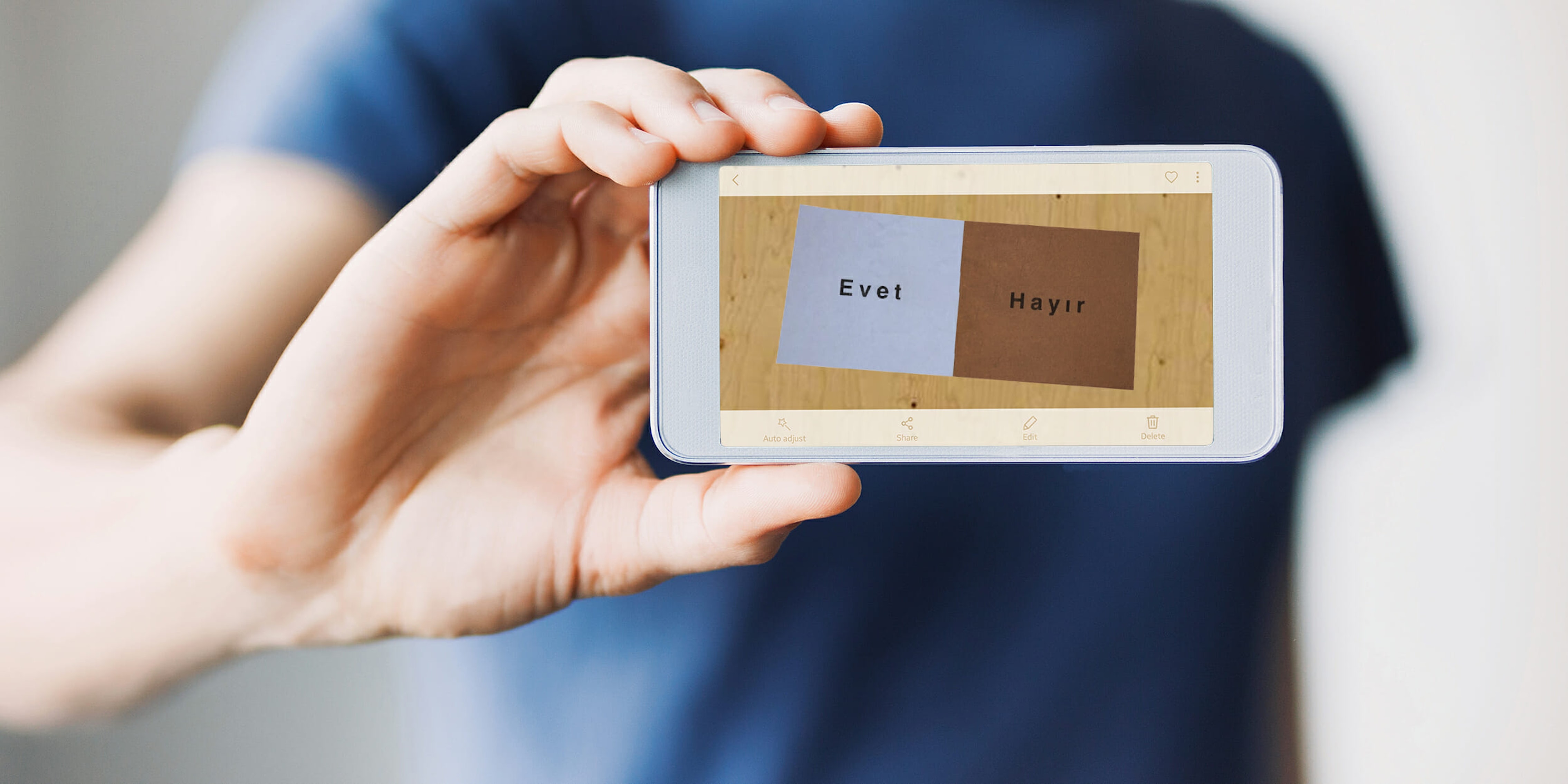 Earlier this month, about 50 million Turkish people lined up at voting centers to cast their opinion about constitutional amendments that will greatly expand President Recep Tayyip Erdogan’s powers. But not everyone was able to vote in their free will. A ruling-party mayor openly threatened to fire employees if they don’t vote for the Yes side; a pro-government businessman fired workers who said they will vote against the amendments; and there were wide rumors about companies asking employees to prove they voted “Yes.”

So a Turkish software engineer, Midori Kocak, made an application that creates ballot paper photos for those who have to bring a visual evidence to keep their job.

English translation: “For companies asking for the photo of the ballot, ballot-photo creator

By popular request, Kocak added the options to randomly change the wooden desk background and to add ID card as a layer to ‘prove’ authenticity. The application was widely shared on social media and forums, confirming the scale of voter intimidation.

Kocak, who had to leave Turkey after being threatened for her sexual identity, says she developed the application after reading about workers who were forced to bring photos of their Yes vote. In an email to the Daily Dot, she added that her online application received thousands of visitors during the crucial referendum from all over Turkey. For privacy concerns, she did not collect IP addresses. Users of her app have refused come forward to talk about the intimidation.

It is, in fact, against  Turkish election law to take photos of your ballot paper, and clerks do ask voters to leave their phones at the registration desk. But pro-Erdogan trolls instructed people to bring two mobile phones and hand over one to take a photo with the second.

An influencer among the Erdogan youth shared a selfie from the voting booth to actually show off his Yes vote:

A local politician from Southeast Turkey shared his photo of voting Yes with the message, “Loyalty to our leader is our honor.”

In January, when the ruling party deputies breached the secret ballot during the constitutional amendment debates, the issue caused a huge brawl in the Turkish Parliament. The opposition argued that this is a method to exert pressure on the ruling party line. At April 15’s referendum, the open-voting breach became the mainstream.

However, taking photos was not the only irregularity during the voting. International election observers from Organization for Security and Cooperation in Europe (OSCE) have issued a preliminary report that the Turkish referendum failed to meet the standards of a true democratic vote. The issues include the use of dominant government propaganda on the media, use of public funds for the Yes campaign, and the intimidation of No voters. The most damning statement on the report was the decision by the country’s Election Board to validate unstamped ballot papers after the voting was over, which the OSCE team said undermined an important safeguard against fraud. While international observers say up to 2.5 million votes could have been manipulated, the Election Board has rejected all appeals by the opposition.

Following the Election Board’s decision, protest events have taken place in as many as 45 cities, followed by prompt arrests of protesters by morning police raids. While most protesters were detained for breaching the ban on demonstrations, independent news website Sendika.org’s editor, Ali Ergin Demirhan, and documentary filmmaker Kazım Kızıl were arrested for “inciting protests on social media.” Leftist magazine Redaktif and inter-university organization Kolektifler.net were also blocked by the government’s internet authority.

European leaders were careful in their comments about the referendum results, waiting for OSCE observers’ full report and asking Erdogan to respect the opposition. The Trump administration, however, gave mixed messages, with President Donald Trump calling to congratulate Erdogan for his “referendum victory,” the White House downplaying the call, and the State Department issuing a muted but critical statement.