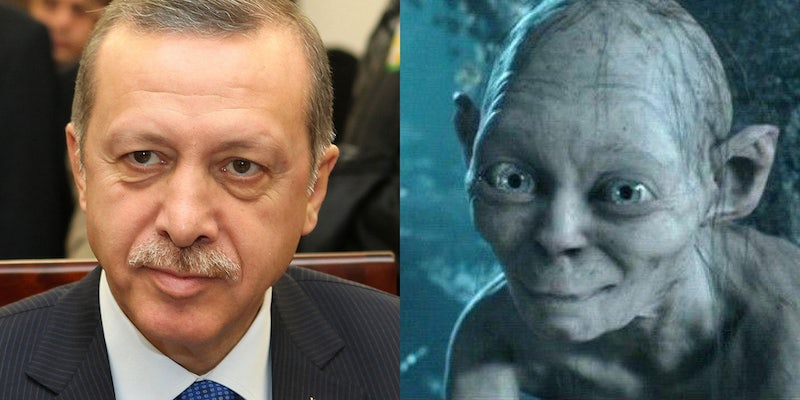 It's a landmark case for Turkish meme law.

A Turkish court has commissioned two expert witnesses to report whether it’s an insult to compare President Recep Tayyip Erdo?an to the Lord of the Rings character Gollum.

The case began a year ago, when Bilgin Çiftçi, a family doctor in the Aydin province, shared a meme comparing Gollum and Erdo?an’s facial expressions to his Facebook page. He didn’t produce the image; it was already a common one on Turkish social media.

Still, the local Public Health Administration office opened an investigation on Çiftçi, which resulted in admonition. But the government’s Public Health Agency challenged the decision, arguing that it didn’t go far enough, and that that Çiftçi should be barred for “unethical behavior.” To support the case against the family doctor, officials provided a full biography of Gollum, claiming Gollum pictures are ideological, and therefore prohibited.

The administrative case against the doctor ended last month, with Dr. Çiftçi being dismissed of duty for “spreading prohibited material and displaying political banners.” But the criminal case against him, in which the prosecution is seeking a prison term of six months to two years, is ongoing. That’s prompted the court to ask the opinion of two experts, a behavioral psychologist and a film studies academic, on Tuesday.

While this is believed to be the first time someone has been arrested for comparing a sitting president to Smeagol, Turkey is in the midst of a serious crackdown on Erdo?an’s critics. According the data of two researchers, Da?han Irak and Benan Molu, more than 300 people are under indictment for “defamation to the President,” a special article in the Turkish penal court with up to four years of jail sentence. Thanks to an amendment to legalize detentions and arrests of those indicted, journalists and politicians from the opposition make the majority of cases.

In March, police searched the house of reporter at the daily Today’s Zaman, as well as that of a colleague’s, and confiscated their phones and computers for allegedly insulting Erdo?an. In November, editor-in-chief Bülent Kene? was arrested for the same reason. Two weeks ago, reporters and columnists of the daily Cumhuriyet stood trial in 3 separate cases of defaming Erdo?an and his businessman son, Bilal. And Tuesday, the same Istanbul court had 9 hearings of editors from leftist daily BirGün, all sued by Erdo?an for defamation.

The crackdown has extended so far that even reporting about the Gollum case can get Turkish  journalists dragged to court. The editor-in-chief of the daily Evrensel, who had written a headline about Dr. Çiftçi’s initial dismissal for the meme, has also been indicted for defamation.

Update 12:23pm CT, Dec. 3:  Lord of the Rings director Peter Jackson has pointed out that most of the memed pictures are of Smeagol, Gollum’s friendlier alter-ego.

“If the images below are in fact the ones forming the basis of this Turkish lawsuit, we can state categorically: None of them feature the character known as Gollum. All of them are images of the character called Smeagol,” Jackson said in a statement to The Wrap, presumably with his tongue lodged in his cheek.

“Smeagol is a joyful, sweet character. Smeagol does not lie, deceive, or attempt to manipulate others. He is not evil, conniving, or malicious—these personality traits belong to Gollum, who should never be confused with Smeagol,” he said.