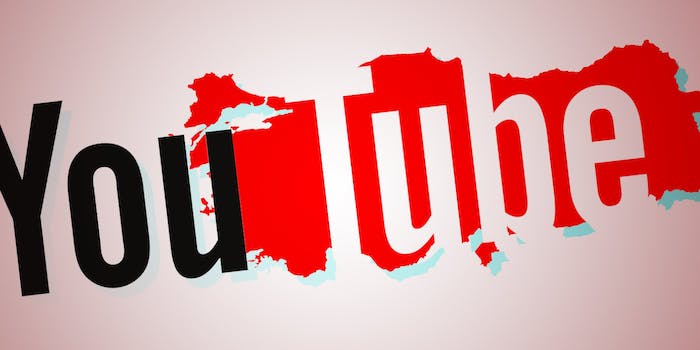 This is not the only time Turkey's government has censored the Internet.

Turkey’s decision to ban YouTube for two years was a violation of freedom of expression, the European Court of Human Rights says.

From May 2008 until October 2010, average Internet users in Turkey found themselves unable to access YouTube unless they used a workaround, such as a Tor browser. The reason? A court order against the site, inspired by three Turkish law professors who uploaded 10 videos deemed overly critical of Mustafa Kemal Atatürk, the revered founder of modern Turkey.

The three repeatedly tried legal channels to get the ban lifted—in one instance noting that YouTube had blocked the videos specifically in Turkey, though it was possible to circumvent that block—to no avail.

President Recep Tayyip Erdo?an has previously declared that “social media is the worst menace to society.”

Despite that ban on YouTube, and several others before and after it, there is “no provision in the law allowing the domestic courts to impose a blanket blocking order on access to the Internet, and in the present case to YouTube, on account of one of its contents,” the court, whose rulings are not legally binding, said Tuesday.

This ruling didn’t address more recent Turkish censorship of YouTube that happened later, and is arguably more politically motivated. Since the Atatürk-inspired ban on YouTube was lifted, the country has censored it several more times, including once in 2014 over a leaked recording of Foreign Minister Ahmet Davuto?lu discussing what it would take to invade Syria, and again over images of the aftermath of a terrorist attack that circulated widely on social media.

Turkey has been resoundingly criticized for its readiness to censor all sorts of online content, ranging from journalistic descriptions of what it says is terrorism to online depictions of atheism. President Recep Tayyip Erdo?an has previously declared that “social media is the worst menace to society.”