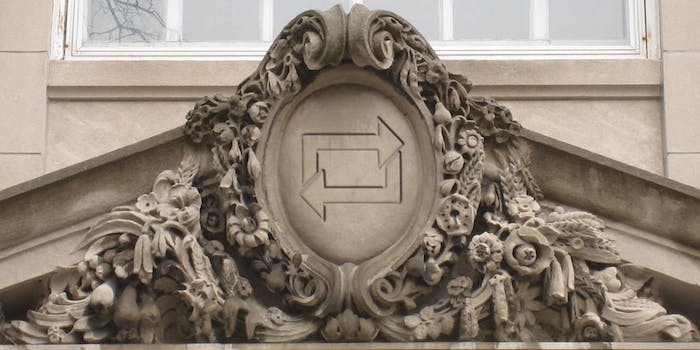 Tumblr goes to the Supreme Court

For the first time in Tumblr’s six-year history, one of its blogs may influence a Supreme Court decision.

For the first time in Tumblr’s six-year history, one of its blogs may influence a Supreme Court decision.

The blog is called “‘Corruption,’ Originally.” It was created by activist Lawrence “Larry” Lessig and Sen. Elizabeth Warren as a place to collect 325 historical uses of the term “corruption” by Founding Fathers George Mason, Patrick Henry, and signer of the Constitution Charles Pinckney. 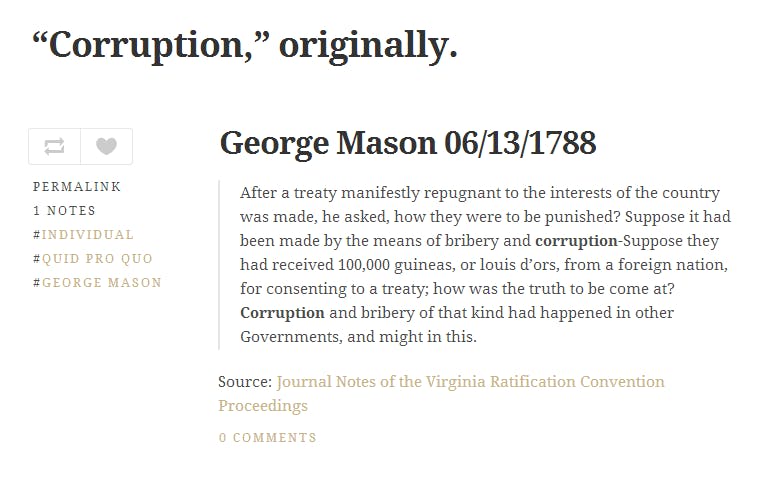 The blog is being used in a brief that argues against “more elbow room on big campaign contributions,” United Press International reported.

The brief is in response to McCutcheon vs. the Federal Election Commission, which will be presented in court Monday. The case will ultimately determine whether individual contributions to politicians and political parties should be raised.

As it currently stands, a citizen can contribute “$2,500 per election to federal candidates, up to $30,800 per calendar year to a national party committee, and up to $5,000 per calendar year to any non-party political committee,” the Federal Election Commission states. Donor Shaun McCutcheon hopes these limits will be increased so he can contribute more to the Republican National Committee (RNC).

When it comes down to it, this case is about political corruption and what the word really means.

“The upshot of the collection is that the Framers [of the Constitution] meant more by ‘corruption’ than simple ‘quid pro quo’ (this for that) corruption,” Lessig wrote on Tumblr this morning. “In particular, their main focus (or most common usage) was institutional corruption. And one prominent example of the institutional corruption they were concerned about was an institution developing an improper dependence. Like—to pick just one totally random example—a Congress developing a dependence upon its funders, rather than the dependence the framers intended—’on the People alone.'”

Lessig hopes the quotes from America’s most respected politicians appeal to the five Supreme Court justices who “say they interpret the Constitution by looking to its original meaning.”

For good measure, Lessig may want to consider adding in some GIFs to really drive his argument home.