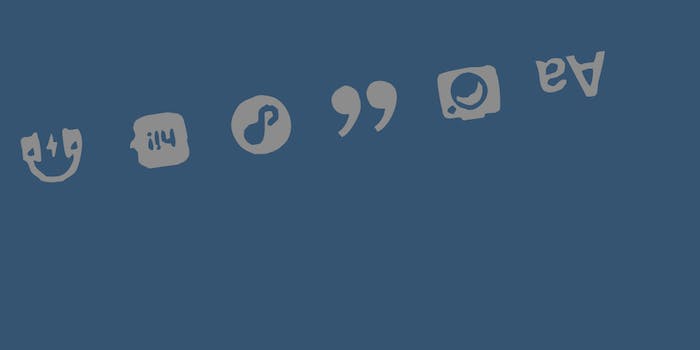 You’ve been having a rough time of it lately. Sure, you’re worth $1.1 billion to Yahoo, but actual Tumblr users are having their doubts. First you baffle everyone with a series of largely silent Tumblr layoffs, including the much-touted Storyboard. Then Tumblrites turn up their noses at your mobile ad platform. Finally they launch a full-scale rebellion over the Yahoo merger. And now, after a recent interface overhaul rendered the much-loved app Missing E all but useless, you’ve done a new redesign that’s inverted the dashboard layout and disabled Tumblr Savior, perhaps the most practical and widely used third-party app on the site.

Tumblr’s UI literally changed as I was scrolling down a page and oh my god WHY DID THE NOTES MOVE twitter.com/continuants/st…

The change repositions the “like” and “reblog” functions, along with other options, to be at the bottom of a post instead at the top. The otherwise inexplicable navigation change could be a logistical move to make way for the money—literally. Beginning today, the much-loathed sponsored posts that Tumblr recently debuted on its mobile platform are moving to the Web platform as well.

“‘Nothing will change.’ EH?” said a frustrated egotisticalslug in response to the ads, referring back to Yahoo’s promise that their Tumblr buyout wouldn’t change Tumblr’s freewheeling environment.

Every sponsored post comes with its own catchy dollar sign. And it appears precisely where Tumblr’s heart used to be—that is, its heart-shaped “like” function. Who are we to say we never saw it coming? 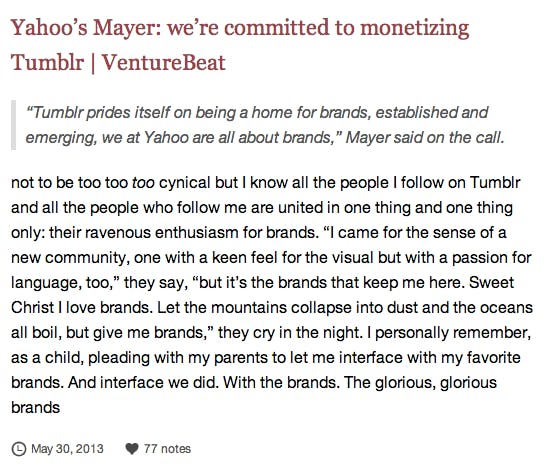 Symbolism aside, the change is a logistical nightmare. For one thing, it conflicts with Tumblr’s own shortcut buttons. When using the “L” shortcut key while scrolling through your dash on monitors with medium-sized resolutions or lower, you can’t actually see if you’ve successfully liked a post or not, because the note is now at the bottom of the post.

And what’s worse, the newest change has rendered Tumblr Savior and xKit, an alternative to Missing E, temporarily ineffectual. Savior and xKit both allow the reader to block tags they don’t want to see on their dash.

For instance, if you hate small children, adding “babies” to Tumblr Savior will remove any and all mentions of babies from your dash. Or at least it did until last night, when the changes took effect.

STOP WITH THE USELESS UPDATES PLEASE

—and cracking lots of frustrated jokes.

tumblr is seriously that husband that takes up these little diy projects on things in your house that are completely fine, but won’t let a contractor look at the strange mold infestation in your attic

They’re also attempting to find workarounds. Some posts are touting a Tumblr Savior reinstallation, while others are citing browser-related workarounds. The new layout seems to be manifesting differently across various browsers and platforms. 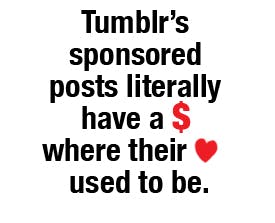 Tumblr tags are also affected by the new layout changes, prompting users to take to Stylish to implement workarounds there as well.

Meanwhile xKit promptly updated its app with a new version that seems to have fixed the bugs, though it doesn’t appear to be working on all browsers.

Perhaps the most frustrating aspect of all is that Tumblr, in keeping with its ongoing silence surrounding its internal changes, hasn’t stepped in to assist users with the workarounds or update them on the changes to their layouts. The Tumblr staff blog, instead, celebrated sponsored posts, as well as the acquisition of new servers this morning, complete with an additional 3 petabytes. That’s 3,000 terabytes, or 3 million gigabytes, i.e., a lot.

Meanwhile, the “Tumblr staff” tag is full of cries from users begging Tumblr to stop making what appear to them to be mostly cosmetic changes and listen to what they actually want: better search and tag functionality, a stronger communication system, and better usability.

Tumblr users, when Tumblr Savior and xKit are functional again, you might want to try blacklisting the words “wishful thinking.”