Is it fair to accuse Tumblr of "protecting" racists by removing their information from the site?

For better or worse, Tumblr is known as the platform of choice for social justice campaigners. But this weekend, the site was roiling with posts accusing Tumblr’s staff of being racist, censoring content relating to the Ferguson protests, and even protecting members of the Klu Klux Klan.

While Twitter is a vital tool for citizen journalists during protests, Tumblr has become increasingly useful for sharing longer information posts after the fact. In the case of recent protests against police brutality and racism, activists have been using Tumblr’s #Ferguson tag to spread details of the Michael Brown shooting investigation, correct reports from protests, and share advice on how to deal with everything from tear gas to racist relatives.

Tumblr’s reblog function is instrumental in getting informative posts to go viral, but it also has its dark side: doxing, the practice of posting someone’s private information online for purposes of vigilante justice or harassment.

This weekend saw two Ferguson-related controversies blow up on Tumblr. The first was a widespread attempt to dox various people who were either posting white supremacist content, or were allegedly members of the KKK. The second was a rumor that the site had blocked or “cleared” the Ferguson tag sometime on Saturday, causing many users to worry about censorship from the Tumblr staff. 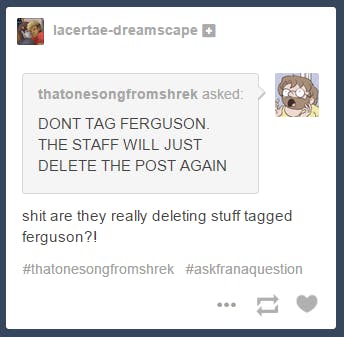 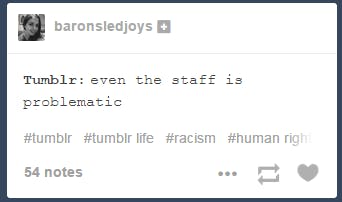 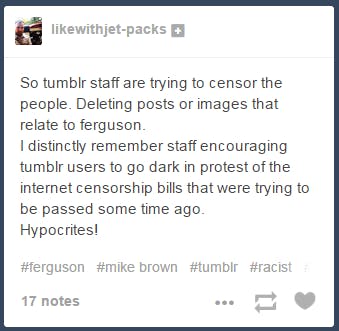 Katherine Barna, Tumblr Head of Communications, told the Daily Dot in an email that it is “completely inaccurate” to suggest that the Ferguson tag was ever purposefully cleared or blocked. She wrote:

“We have absolutely not been removing speech or discussion related to Ferguson, and the Ferguson tag (and a number of related tags) have been featured in trending and other areas of our site multiple times. We remain deeply committed to supporting and protecting freedom of speech.”

On Monday, many people were still posting and reblogging enraged comments accusing the Tumblr staff of silencing posts on the Ferguson tag. However, the Ferguson tag currently appears to be functioning the same way as any other popular tag, with new posts appearing in public tag searches. One blogger actually screencapped some posts from Saturday night and Sunday morning to prove the tag was functioning normally during that time, although a small number of others have also posted to say they saw the tag “cleared” sometime on Saturday.

Barna suggested this could be explained by someone seeing a “no content” message when they searched the tag on a mobile device with insufficient data signal.

One explanation for this widespread belief is that the Ferguson tag was dropped from Tumblr’s list of trending topics, and this somehow developed into a rumor that the tag had been taken down completely. In reality, the site cycles through various trending topics each day. At the time of writing this article, Ferguson is a trending topic again, along with Cyber Monday, The Walking Dead, AIDS, and the NFL.

Another explanation is the fact that Tumblr did delete several posts and images on the Ferguson tag, but not because they were using the tag. The posts were actually deleted or altered because they were leaking private information such as credit card details and home addresses.

Over the past few days, Tumblr removed multiple posts that claimed to reveal the identities and locations of KKK members and people who posted racist content online. One blogger published screencaps of abusive messages she received as a result of being doxed, and later posted to say that her mother had received death threats.

By removing dox posts about alleged members of the KKK, the Tumblr staff were suddenly perceived to be protecting racists. Was the site prioritizing the wellbeing of KKK members over the many Tumblr users who are actively campaigning against racism? The short answer is no.

Tumblr’s real reason for removing the posts is that they’re a clear violation of the site’s terms of service. If you’re posting someone’s address or other personal information without their consent, it’s a violation of privacy. Still, it doesn’t help that Tumblr’s abuse team have sometimes been slow to protect victims of doxing and harassment in the past.

When an ordinary user is being harassed or doxed on Tumblr, they have to contact the abuse team and wait for their case to be handled. Meanwhile, the crackdown on Ferguson-related dox posts was tackled with great efficiency, most likely because these posts were being shared on popular tags, and some had already received a great deal of publicity thanks to Anonymous hacktivists. But even though this explanation makes sense, it’s understandably difficult for many users to deal with the knowledge that Tumblr’s staff were so quick to protect alleged members of the KKK from doxing, while plenty of abusive, violent, racist, or otherwise offensive content has stayed on the site for much longer without interference. 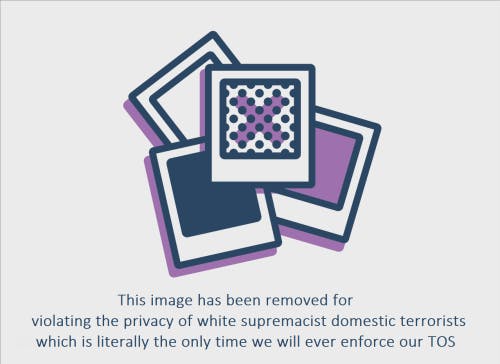 The anger directed at the Tumblr staff was further exacerbated by a completely unsubstantiated and inaccurate rumor that Tumblr has ties to white supremacism via its parent company Yahoo!, whose CEO, Marissa Mayer, serves on the board of directors for Walmart.

According to this rumor, Walmart donated $10,000 to one of Darren Wilson’s fundraisers, which were publicly supported by people posting racist comments online—and even the KKK. Therefore, Marissa Mayer is supposedly tainted by association. But while Walmart’s public image is about as warm and fuzzy as Darth Vader, there’s no real evidence that Walmart donated to white supremacist groups or any of the Darren Wilson fundraisers. Quite apart from the fact that Walmart is notoriously unwilling to pay its workers more money—never mind donate money to a cause that isn’t good for their own PR—the lone source for this rumor seems to be a handwritten placard held up at a Ferguson protest in October.

In the case of doxing white supremacists, harassment and vigilante justice are two sides of the same coin. The ethics of doxing the KKK are certainly a matter for debate, but Tumblr’s terms of service are not. (It’s also arguably ridiculous to expect a mainstream blogging platform to endorse doxing, even if the people in question are members of a hate group.) But while Tumblr was obliged to delete information revealed by Anonymous, they still seem reasonably comfortable with the blog Racists Getting Fired, which is still online and gaining followers hand over fist.

Racists Getting Fired collects examples of people who were fired from their jobs after their racist social media posts were shared online. Since all too many people seem happy to share their racist opinions at the moment, it’s easy to locate this type of post and notify their employer. 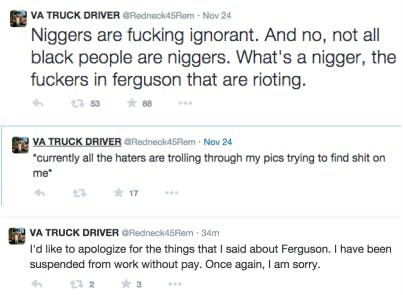 This kind of online vigilantism has often been praised in the past, most recently when video game reviewer Alana Pearce used Facebook to report rape threats to her harasser’s mom. Racists Getting Fired is more of a grey area than outright doxing because all of its information comes from things people have posted on their own public social media accounts.

Of course, this has not rendered Racists Getting Fired immune from backlash. On Saturday, the creator of the blog wrote that she had received multiple threats from the blog’s detractors… including threats of, yes, doxing.