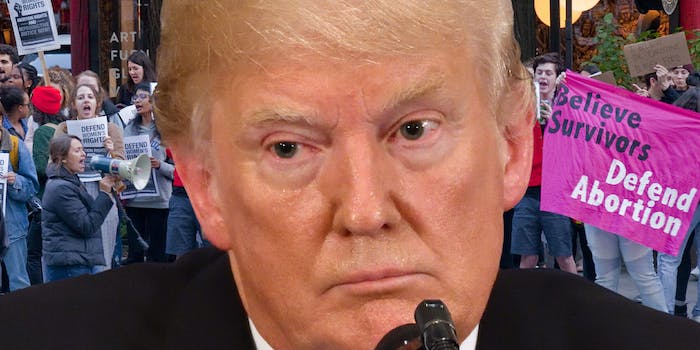 Twitter roasts the president for going after Kavanaugh protesters.

On Saturday, as the Senate voted to confirm Brett Kavanaugh to the Supreme Court, protesters swarmed Washington, D.C. They rallied against a man accused of sexual assault being appointed to the highest court in the land—and the consensus from the right is that they were George Soros-funded operatives, paid for by liberals to make it appear that fierce opposition to Kavanaugh existed.

And while President Donald Trump has gone after them before, on Tuesday he went after their backers, claiming in a tweet that the shadow money supporting them was now also stiffing them.

The paid D.C. protesters are now ready to REALLY protest because they haven’t gotten their checks – in other words, they weren’t paid! Screamers in Congress, and outside, were far too obvious – less professional than anticipated by those paying (or not paying) the bills!

While his tweet raises some interesting questions—if paid protesters aren’t paid are they really paid?—Trump’s needling of bills not being paid brought back to light something the president was infamous for in his past: not paying people he hired to do jobs.

He knows all about contractors not getting their checks. https://t.co/HAFR5mOmOp

Donnie should know since he is the expert in not paying contractors for the work they've done. https://t.co/84ucCKpcCM

When he was in real estate, Trump was on the receiving end of numerous lawsuits from contractors who said the president didn’t pay his bills on time. And as noted by the Washington Post‘s Philip Bump, Trump kicked off his presidential campaign by hiring people to appear at his campaign announcement, then not paying them after.

Again: Trump's campaign launch included paid attendees and the campaign didn't pay the firm that hired them for months. https://t.co/WsxJ5xe7Oo

It’s also not clear if Trump is aware that many people tweeting they hadn’t gotten their check from Soros yet were, uh, joking.

But it was Trump himself orchestrating an expensive-as-hell stunt less than a year ago when he sent Vice President Mike Pence to walk out of an NFL game. At the time, the country was divided about national anthem protests that drew attention to police-involved violence.

Speaking of actual paid protestors, this is a great time to remember that last year the Trump administration spent $325,000 of your money so that Mike Pence could show up to an NFL game and then leave after the national anthem to protest players kneeling at an NFL game https://t.co/vxH07NJvRq