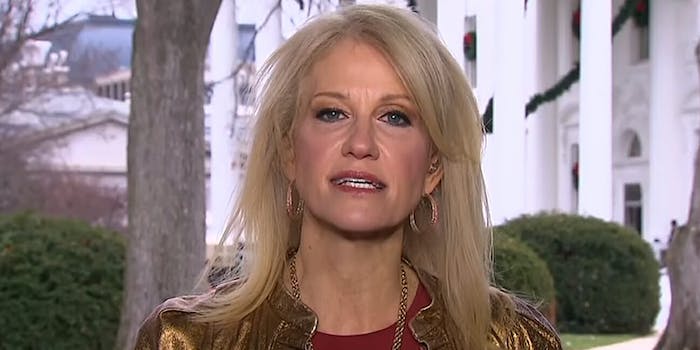 Trump’s opioid council is excelling at doing absolutely nothing

It's not doing well.

On Tuesday, after dealing with the death of his son from an opioid overdose, Fox News host Eric Bolling announced he was “going back to the White House” to fight the epidemic facing America.

Unfortunately, he’ll be working with a council that may not be fit to handle it.

When President Donald Trump appointed Kellyanne Conway as his new point person on the opioid epidemic, eyes rolled for perhaps the thousandth time since Inauguration Day. Whether its family members, CEOs, personal friends, or political operatives, Trump has a knack for appointing the least qualified people possible for the job.

And Conway is already doing worse than we could have imagined.

Politico broke a story detailing how Conway has frozen out drug experts from her opioid efforts. The Office of National Drug Control Policy told Politico that they have been “systematically excluded from key decisions about opioid and the strategy moving forward.” The acting director of the ONDCP has not been invited to attend any meetings with Conway. This news comes on the heels of the previous director’s firing prior to the end of the year.

This news is particularly troubling because similar jobs in previous administrations have largely involved working closely with the ONDCP. In fact, an administration’s “drug czar” is usually the head of the office, which is why a number of publications have declined to refer to Conway as a “czar” since she is still working in the administration.

This is just the next in a string of failures in the Trump Administration’s attempt at tackling opioids. An analysis of what Trump has done around the crisis so far, from messaging to staffing, leaves very little to admire. If the White House continues down this path, the opioid epidemic is shaping up to be one of the greatest policy failures of the Trump administration.

The problems with the administration’s approach to the opioid epidemic begins at the very top. Their messaging isn’t just bad, it ignores the problem completely. While problems like overprescription of painkillers, aggressive drug companies, and poor treatment options persist, the White House has tried to paint the opioid epidemic as a border issue. The border wall, along with a throwback to “just say no” messaging and law and order policing, has been the crux of the strategy coming out of the White House. During the State of the Union, Trump said, “Our plan closes the terrible loopholes exploited by criminals and terrorists to enter our country. These reforms will also support our response to the terrible crisis of opioid and drug addiction.”

Experts don’t see it that way. The border wall would likely have almost no impact on heroin trafficking, and, of course would have no impact on the various legal painkillers that are abused throughout the country. Many heroin addicts get hooked on legal painkillers first. Even if border security could stem the flow of drugs, there would still be the actual issues of the crisis to contend with, like the fact that only 10 percent of opioid addicts currently receive adequate treatment.

Conway hasn’t even been effective at messaging within her own party. West Virginia Republican Senator Shelley Moore Capito told Politico, “I haven’t talked to Kellyanne at all and I’m the worst state for this.” Sen. Rob Portman’s (R-Ohio) office said they are, “uncertain of her role.”

Staffing decisions around drug policy in the Trump administration have verged on parody. In January, a 24-year-old was hired as a deputy at the ONDCP, even though his only job experience post-college was on Trump’s campaign team. He has since been let go, but the approach is indicative of an understaffed and poorly run office, which some have referred to as a “skeleton crew.”

The post-collegiate staffer isn’t the only suspect hire that has taken place at the ONDCP. Andrew Giuliani, 32-year-old son of former New York mayor and Trump booster Rudy has been given a job with the office as well despite having “no background in drug policy.” Rep. Tom Marino (R-PA) was nominated to lead the office, but had to withdraw from consideration after it was revealed that he had previously helped kill the DEA’s authority to shut down suspicious drug shipments.

Then there is the issue of Conway herself. In a scathing indictment of her appointment, the New York Times editorial board wrote, “[Conway] has no public health background, a reputation for bending the truth, and a knack for generating government ethics complaints.”

The lackadaisical approach of the administration towards opioids is even reflected in their budgeting. It is no wonder that Conway hasn’t consulted members of the ONDCP, considering that Trump attempted to slash the office’s budget last year. Trump’s proposal would have cut 95 percent of the office’s budget, splitting it between the Justice Department and Health and Human Services. This further emphasizes the Trump Administration view of the crisis as a criminal and border security issue. Bipartisan opposition stopped these cuts, but the administration is expected to push them again this year.

Trump focused heavily on the opioid crisis during his campaign, in a successful bid to win some of the hardest hit states, like West Virginia, Ohio, and Pennsylvania. Those who work on the issue have already all but given up on his rhetoric as little more than talk. West Virginia Public Health Commissioner Rahul Gupta has said, “His thoughts and prayers are helpful. But additional funding and resources would be helpful. Mike Parrino of the American Association for the Treatment of Opioid Dependence asked, “The President said we’re going to have a massive media campaign…Where is it?”

That is to say, while Conway is, by all accounts, failing at her job, she is doing exactly what Trump wants her to do on this issue: ignore it.