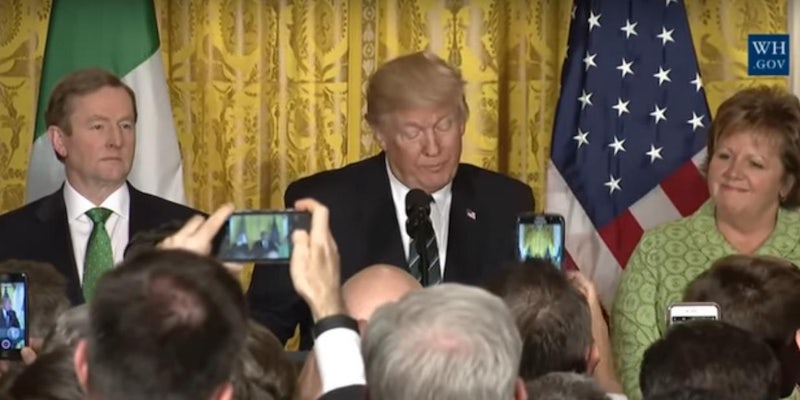 Trump’s favorite Irish proverb is actually from a Nigerian poem

The Trump administration needs to up their Google game.

President Donald Trump confused the internet on this week during his St. Patrick’s Day event on Thursday when, appearing alongside Ireland’s prime minister, he quoted an Irish proverb that actually turned out to be Nigerian.

“As we stand together with our Irish friends,” he said, “I’m reminded of that proverb—and this is a good one, this is one I like. I’ve heard it for many, many years and I love it. ‘Always remember to forget the friends that proved untrue, but never forget to remember those that have stuck by you.’ A lot of us know that, we know it well. It’s a great phrase.”

Trump reads one of his favorite Irish proverbs pic.twitter.com/KgE5ipvepw

The problem, however, is that no one knew of that proverb. Even Irish tweeters responded with bemusement.

After a little digging online, the proverb turned out to be a quote from a poem written by Nigerian poet Albashir Adam Alhassan.

The quote comes up as a top result in a Google search for ‘Irish proverb’. So, it appears that these lines from a Nigerian poem surface in multiple places online as an Irish saying.

Trump's Irish Proverb may have been written by Albashir Adam Alhassan but to be fair it IS in the second Google hit for "Best Irish Proverb" pic.twitter.com/53sXOi1EHr

Although, given that the president has known and loved these lines for “many years,” we can assume he didn’t just take to the internet and lift the first quote he liked… right?

One of his staff is definitely trolling him now, and it's brilliant
Trump: 'quick, find me an Irish proverb!'
Staffer: 'Sure Mr President.. https://t.co/cCuOyh1afV

A White House spokesperson attempted to clear things up in a statement, saying that the quote had been “originally supplied in an email [from] the State Department… in advance of this event.”

St. Patrick is also the patron saint in Nigeria, too, but rather than clever cross-referencing, it seems that the president simply didn’t check his sources.