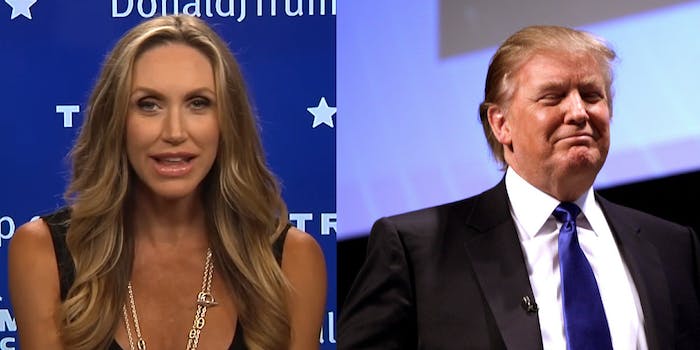 Why rail against “fake news” when you can just produce your own campaign-style video that shows “real news?”

“Want to know what President Trump did this week? Watch here for REAL news!” the post on Trump’s Facebook page reads.

The video, which has around 2 million views on Facebook, includes Laura Trump, who is married to the president’s son Eric Trump, talking about the president donating his salary to the Education Department, the unemployment rate, the stock market, and Trump giving out the Medal of Valor.

“I bet you haven’t heard about all the accomplishments the president had this week because there is so much fake news out there,” Laura Trump says, kicking off the string of talking points.

The New York Post speculates that the video was produced by Trump’s reelection campaign.

Trump has been frustrated with the news media for reporting on stories that cast him in an unfavorable light. Getting supporters to heckle the “dishonest” media was a staple at his campaign rallies and some experts believe the rhetoric Trump uses against the media could lead to a slippery slope escalation.

On Tuesday, Trump tweeted about the “fake news media” wanting him to stop using social media to broadcast his message. The post came the day after Trump’s Facebook page launched the Laura Trump-hosted video.

Only the Fake News Media and Trump enemies want me to stop using Social Media (110 million people). Only way for me to get the truth out!

The almost 3-minute “real news” video seems to be the first in what will be a number of “real news” segments occurring in the future.